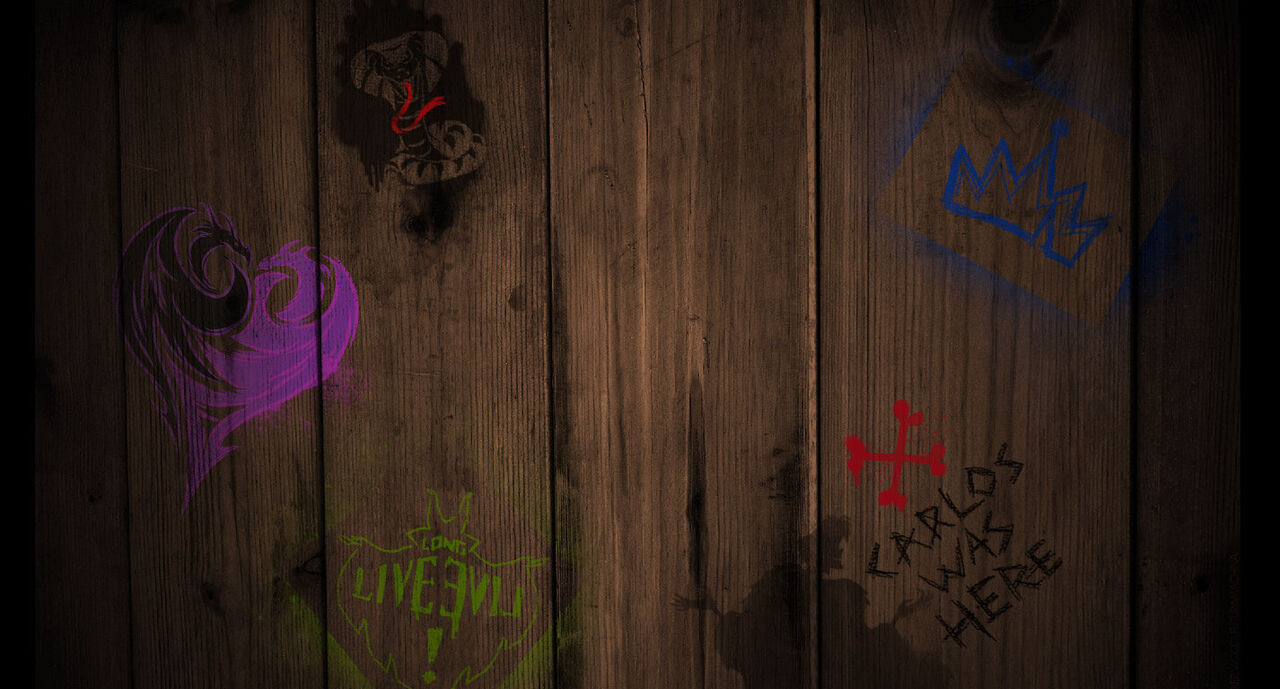 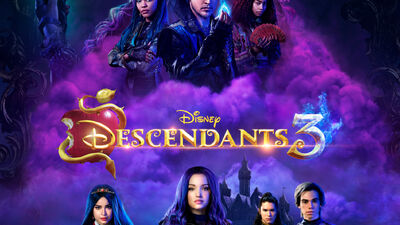 Descendants 3 is a Disney Channel Original Movie and the third and final installment in the Descendants trilogy. It was announced on February 16th, 2018, during the premiere of Zombies. The film premiered on August 2nd, 2019. The release date was revealed in the description of "VK Day Is...

The atmosphere in the headmistress's office was tense, which made sense, what with the second in line to the throne of Auroria having recently snapped and placed much of the population of the school-not to mention the entire kingdom-under a sleeping spell, and turned the rest, including the headmistress, into stone statues.

On one side of the desk sat Audrey; on either side of Audrey sat her parents, Prince Phillip and Princess Aurora -not king and queen yet, as their respective parents, while elderly, were still very much alive.

On the other side of the desk sat Cinderella's Fairy Godmother, the headmistress of Auradon Preparatory Academy.

On the side of the desk sat Ben, having pulled up a chair for himself and cleared away some space, since he felt that neither side of the desk was appropriate for him right now, as a student of the school but also as a king.

They were here to decide on a suitable punishment for Audrey.

Not the Isle, of course. They had seen how that had worked out. But there were a lot more possible consequences for a crime than simply "lock her up and throw away the key." It seemed that the Beast, however, hadn't known this, or had chosen to ignore it.

"Community service," the Fairy Godmother was suggesting. "Especially to those areas badly affected by-"

Someone pounded hard on the door, making them all jump.

"I explicitly said no interruptions," the Fairy Godmother said, frowning.

There were a few more bangs on the door. The knocks sounded angry, if emotion could be determined by knocks on a door, which it sometimes could, depending. Whoever was at the door clearly didn't care about whatever the headmistress had said.

"I suppose I'd better answer it," the Fairy Godmother said, beginning to rise, but Phillip, ever the gentleman and also sitting closer to the door, answered the door before she could.

"If it's a student-" the headmistress started, but she didn't get to finish her sentence.

The moment Phillip opened the door someone shoved it, hard, making him stumble back.

A girl who looked like an older version of Celia Facilier except with darker, straighter hair and lighter eyes stormed in, zeroing in on Audrey. "You!" she shouted.

Several things happened at once.

Audrey stumbled back a few steps.

The secretary rushed in, saying, "I'm sorry, I couldn't stop her."

Phillip stepped in between the intruder and his daughter. "Who are you?" he demanded.

The girl turned to him and Aurora. She gave a perfectly formed curtsy. "I," she said, in a tone that somehow managed to be both respectful and mocking at once, "am Frederique Odette Facilier. My friends call me Freddie, but you're not my friends, so don't call me that."

"Miss Facilier," the Fairy Godmother started. "This is a private meeting."

Audrey opened her mouth, to say she knew not what.

"I was patient!" Freddie said. She was shouting now, and her words seemed to be directed at Ben now as much as Audrey. The room seemed to chill. "I waited! I didn't try to sneak her off! Do you know how many times I was tempted to? I could have gone home for the summer and snuck her out in a suitcase or something! But I listened to the rules, I listened to all your speeches about political whatever and getting people used to us gradually and making a good impression, and I didn't complain! Not even when I didn't know until the last minute if Celia was one of the kids who was going to be chosen to get off the Isle, even though I'd been begging you and Evie for the past month! Not even when I wasn't allowed to meet my sister right away when she came over! I listened to the rules! And then!"

She glared at Audrey even harder. The lights flickered.

"You think you can just attack my sister and get away with it?" Freddie demanded.

"Let me finish," Freddie said, and suddenly Ben couldn't speak. He felt cold from the inside, like he had the flu.

Freddie's shadow moved, growing larger and larger, with giant teeth set in a rictus grin and clawed fingers, pinning everyone's shadows down, making them immobile. Ben couldn't move. Neither could anyone else, except Freddie and Audrey.

"Listen to me, Audrey Rose," Freddie said, her voice quiet now, and somehow that sounded even more dangerous than when she'd been shouting.

Audrey took a step back, but Freddie stepped forward, her shadow looming large over them all. The room darkened from the corners outward. "If you ever come near my sister again," Freddie hissed, her eyes glowing yellow in the twilight gloom, "I will personally bind your soul so deep on the Other Side that nothing can bring you back. Believe me, there are ways." She laughed unpleasantly. "I don't care if I get sent back to the Isle for it."

"Stay away from my family," Freddie ordered. "Or else."

She glared at Audrey, and Audrey felt her own shadow rising up against her as strange, eerie noises echoed from the room's shadowed corners.

Audrey's shadow stood, glaring at her just like Freddie was, ready to fight her, to bring her to the Other Side; it was so dark, Audrey couldn't see, she couldn't breathe-

Suddenly sunlight filled the room again; Freddie's menacing shadow shrank into its ordinary shape on the floor, laying there innocuously. They could all move again, but no one did.

"And don't you forget it," Freddie told Audrey savagely. She gave Aurora, Phillip, and Ben another mocking curtsy, then turned and stalked out of the office, slamming the door, which echoed in the silence she left behind her.

In Descendants 3, Audrey went all “Queen of mean” mode. But, in the end, she finally view the errors in her ways. Giving her a chance to start over.

The spin-off should be focusing on Audrey’s life after Descendants 3, with the villains all set into Auradon. However, she deals with the consequences of her actions in the last movie, as well as dealing with family issues (you know, her grandma) and people mocking her because they’re happy that Ben break up with her, nicknaming her “Queen of mean”.

Audrey decides to move on from her old self and runaways home. To a new city called “FantasiaWood” (from the Fantasia movie and taking inspiration in Hollywood), the only city in Auradon which magic wasn’t retired.

During her quest for redemption, she befriends new characters...

*Andy Tremain, son of Anastasia (and younger brother of Anthony Tremain): Andy is a noble and gentle man, despite being the son of a wicked step-sister. He’s ashamed of his family and runaway from them. He wants to be known for the person he is really and not to be compared to his status as a Tremain.

*Malcom, son of Merida: Malcolm’s the athletic type. Practicing as many sports as he can (including archery). But, he never knew his father and his mother never talks about him. He’s 🏳️‍🌈

*Jackie Skellington, daughter of Jack Skellington: Jackie is an fierce underdog with fire inside her soul. She hates Halloween and her father (due to his actions during the events of Nightmare before Christmas). She often fights with Malcolm.

*Betty Darling, daughter of John Darling (Wendy’s brother): Betty’s an old friend of Audrey. She’s a creative, But clumpsy girl (like Marcy from Amphibia). Still, she cares about Audrey, despite her “previous actions”

*Ryder Hood, son of Robin Hood: Ryder follows his father’s footsteps, stealing to the rich and give it to the poor. He’s Malcolm’s crush🏳️‍🌈

Audrey should develop magic powers, due to her exposure to Maleficent’ scepter. She should get training from Merlin.

The main antagonists of the series should be Claude Frodo and his daughter, Talia (Claudine’s older sister).They conspire against Mal and their friends for “ruining” the villains’ legacy 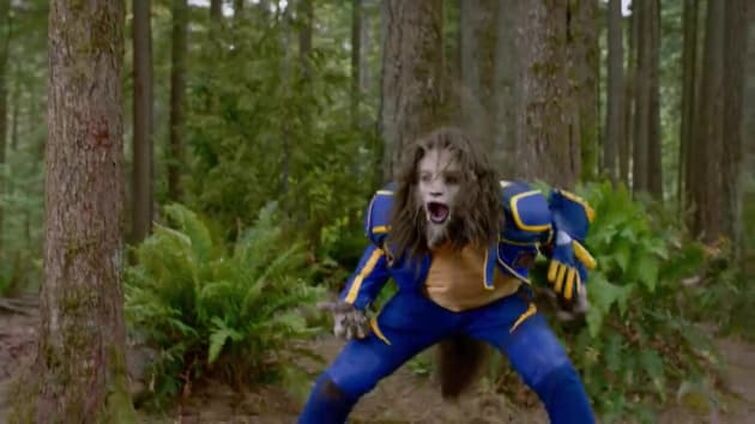 So seven hours ago the YouTube channel Descendients LA posted a video where the live action actors and voice actors for Princess Audrey aka The Queen of Mean (Sarah Jeffery) and Jay (Booboo Stewart) both say that there is a big announcement coming this Friday during the finale of Secrets of Sulfur Springs, I think that it is maybe some related to the Mal’s and Ben’s Wedding shorts or maybe something about Descendants 4 or maybe something about Descendants: Wicked World season 3? But I would like to know what you think it is? Also here is the video 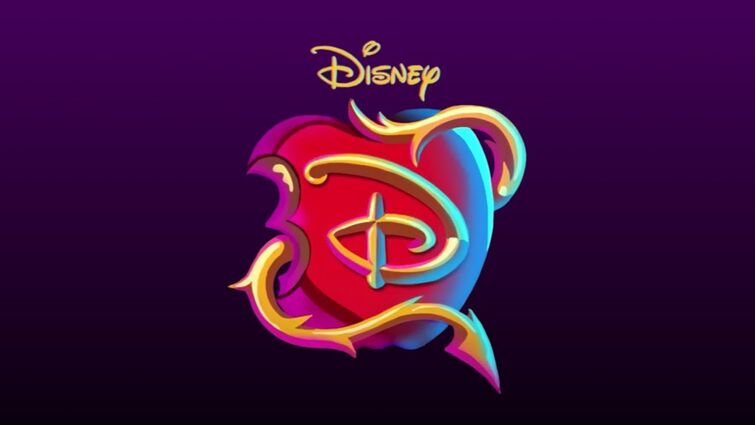 So I've checked out this wiki several times, and it seems like nobody comes here anymore. Is that true? I'm like a huge Evie fan, and I'd love to talk Descendants with you guys, but I was just wondering because I heard this wiki was mostly abandoned...

I loved Audreys song! It was favorite