Aliki Theofilopoulos Grafft
"All Hail the New Q.N.L.B." is the thirteenth episode of the animated short series, Descendants: Wicked World. It premiered on July 5, 2016.

Evie brags about being elected the new queen of the Neon Lights Ball and Jane reveals her mascot uniform is stolen.

In Audrey's Dorm, Mal and Freddie are reading books while a sulking Audrey is brushing extremely long hair belonging to Ruby. Just then, a joyful Evie bursts into the room with a makeup kit, asking if anyone is ready for a makeover. Mal is ready for one but everyone else is not, especially Audrey. She is upset because Evie was chosen to be the Queen of the Neon Lights Ball and she was not. Ever since Evie won the crown, she had become very boastful about it and kept rubbing it into everyone's faces. Evie's boasting is getting on Audrey's nerves, and to help her deal with her stress over losing she is brushing the really long hair.

Evie gets back to the makeover she promised for the girls. She suggests in giving Freddie a look that would make her less voodoo and more "new-do", but Freddie prefers to be left exactly the way she is. Turning to Audrey, Evie suggests apple red lipstick and some wicked Cheshire Cat eyelashes, but Audrey is not interested and remains furious over losing. Then lastly, Evie suggests giving Mal a purple look, even though she was already wearing purple.

Just then Jane comes in with word that her mascot uniform has disappeared before angrily turning to Mal. She accuses her of stealing it and shows that she found her bracelet in her room. Mal denies stealing her uniform and has no idea how her bracelet ended up in Jane's room in the first place.

"Who's ready for party makeovers?"

Mal and Audrey look at each other

"Never would have guessed that."

"Freddie? Did you just ask who did win?"

"I'm thinking a little leave me exactly the way I am."

"Why are you looking at me?"

"If I spelled away every single non-fashion-forward item I saw everyday, there'd be no clothes in Auradon."

"So you're saying you don't like the way we dress?" 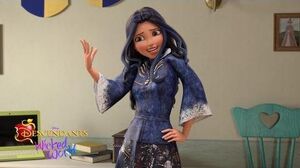