Jay and Carlos fail to show up to pick up the girls, so Jane creates a ride instead.

Still at the Mad for Tea Cafe, the girls are waiting for Jay and Carlos to pick them up and take them to the Neon Lights Ball. However, they appear to be very late as the girls have been waiting for about fifteen minutes. Mal and Evie are certain they are coming, but the others are becoming doubtful. They are expecting Jay and Carlos to pick them up on a magic carpet.

Finally, Ally is the first who can no longer wait. She turns to Jordan and asks if she has a spare magic carpet they can use to get to the party on time. Unfortunately, she does not have one, mainly because she has not yet passed her carpet driver's test. Ally then turns to Jane and asks if she can use her magic to conjure up a ride for them. Mal volunteers to do it but Ally nervously declines her request. Jane however, still new to using magic, is unsure she can conjure up a ride. But she gives it a try and instead of a ride she conjures up a big pumpkin. While she claims it is just a simple pumpkin, everyone thinks it is some kind of magic pumpkin they can ride. After Mal quiets everyone down, Jane uses her magic to change the pumpkin into a minivan that runs on vegetable oil. Now the girls have a ride they can get to the Neon Lights Ball on time.

Waiting for Jay and Carlos

"You said that fifteen minutes ago."

"I'm sure they're just around the corner."

"I just hope that corner isn't on the other side of Auradon."

Audrey asks about how big the carpet is

"From what I heard about Jay, I'm sure it's stolen."

"We're going to be riding on a stolen carpet?"

"This party just got interesting."

"I take back everything bad I ever said about you."

"What did you say about me?"

"Oh? Because I'm a genie who lives in a lamp, I automatically fly around on an old rug?"

"Jane, you're all magical now. Can't you whip us up a ride?"

Jane is unsure if she can use magic

"What about Lonnie? Can't she pick us up?"

"I get carsick on flying pumpkins."

Ally claims it is a pumpkin boat

"Pumpkin clashes with my eyes."

"Guys, let Jane do her thing."

Jane is about to use her magic to turn the pumpkin into...

"It's green. Runs on vegetable oil."

The girls are ready to go to the Neon Lights Ball

Mal is proud of Jane

Evie and Mal are disappointed about Jay and Carlos being late 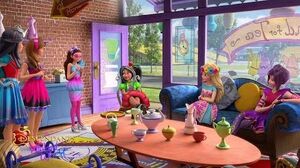