Eric Fogel
"Celebration" is the thirty-third episode of the animated short series, Descendants: Wicked World. It premiered on February 24, 2017 and is the fifteenth and final episode in the second season. It is also the series finale.

As Mal, Evie, Carlos, Jay, and Freddie are bestowed their Jewels at the Jewel-bilee, all the AK's and VK's agree that they really are better when they're working together.

After defeating Zevon and restoring Carlos, Jay, Jane, and Freddie to their original sizes, the Jewel-bilee ceremony resumes with Ben presenting the VKs' Birthright Jewels to Carlos, Jay, Freddie, Evie and Mal. The VKs are delighted to have their jewels, especially Mal. She turns to Audrey, who apologizes for not believing in her. Mal happily accepts her apology, and the VKs and AKs celebrate with a musical dance number.

See you at another Descendants series! 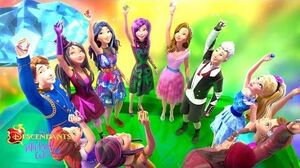