Eric Fogel
"Chemical Reaction" is the twenty-third episode of the animated short series, Descendants: Wicked World. It premiered on November 18, 2016, and is the fourth episode in the second season.

During the late hour of the night, someone breaks into the science lab and steals all the chemicals. By morning, Evie is in the lab creating rainbow nail polish with Mal, Jane, Freddie, and Ally assisting her. Evie asks Jane to get some emulsifier from one of the cupboards, only to discover that they are gone. Evie then asks Ally to check the draws and they are empty too. This leaves the girls puzzled because everyone in Auradon is nice and cannot define who would steal the chemicals. Suddenly, Audrey angrily bursts into the lab with a picture of her vandalized room on her phone. She immediately points the finger at Mal for spray painting her room and stealing the chemicals. As she goes on accusing Mal of her history of evil, she becomes Rotten to the core and casts a Bubble spell on Evie's nail polish mixture.

Colorful bubbles begin to brew from the beaker. At first, the girls find them pretty, but their attitude soon changes when the bubbles start to pop and stain their clothes. Soon everyone starts to panic and run around the lab like crazy. Audrey uses Jane as a human shield, Ally hides under the table, and Freddie tries to fight off the bubbles with a flask. Mal meanwhile just stands in the middle of the commotion watching everyone in amusement. Eventually, all the bubbles have popped on everyone's clothes, except Mal's, are ruined in colorful stains. Everyone is a bit upset with Mal, only for them to be settled by Evie who says the stains on their outfits make them look hot. Luckily, the girls agree with Evie that they do look hot with their clothes ruined. Then after Evie sends them away she turns to Mal, only to find her gone. Everything that has happened is leaving Evie worried. She knows something is wrong with Mal and it is getting very bad. 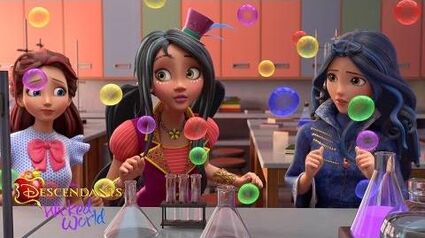