Cogsworth is an ally to Belle and Beast. He appeared in the book, Descendants: Isle of the Lost. He also attends The Council of Sidekicks meeting.

On Christmas night, an old beggar woman came to the castle and asked for shelter. Because of her repulsive appearance, the master of the castle, the Prince, turned her away. She then revealed herself to be a beautiful Enchantress, and transformed the Prince into a hideous beast, because of his cruel ways. For further punishment, the castle servants were cursed as well, with Cogsworth specifically turning into a clock. If the Beast can't find anyone to love and love him in return by the time the last petal of an enchanted rose falls, he and the servants will be cursed forever.

A few years later, a man named Maurice lost his horse and needed a place to stay during the brutal winter night. Cogsworth opposed the idea of inviting him in because of the master's rules, but Lumière went ahead and served Maurice anyway, with the other servants following along. Soon enough, the Beast arrives and imprisons Maurice. Cogsworth and Lumière bicker over the event until they spot a girl, a young maiden named Belle, who is looking for her father, Maurice. She trades places with him as a prisoner, and Cogsworth joins the other servants in their attempt to help Belle and the Beast fall in love to break the spell.

As time passed, Belle and the Beast have developed a close relationship. Cogsworth and the others decided to set up a ballroom dance to seal their relationship, but the Beast frees her when Maurice becomes stranded in the woods looking for Belle. Cogsworth is the first to hear of Belle's release and quickly informs the others. With no hope of becoming human, Cogsworth is fed up with the very idea of Belle being able to break the spell. Suddenly, an angry mob invades the castle to kill the Beast.

Cogsworth and the other servants battle heroically and defeat the villagers. Cogsworth even saves Lumière's life during the battle. Meanwhile, the Beast battled Gaston, the leader of the mob, and an admirer of Belle. He fatally stabs the Beast right before falling off the castle rooftop, to his death. Cogsworth, Lumière, and Mrs. Potts head to the Beast's side. He dies and the three losses all hope, but Belle confesses her love before the last petal falls. The Beast transforms into the Prince once more, and Cogsworth regains his human form as well. During the final scene, he offers to bury the hatchet with Lumière, only to start arguing with him about who foretold the fact that Belle would break to spell first (it was Lumière), but eventually, they break off to watch Belle dance with the Prince. 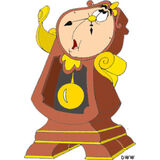 Cogsworth in his Clock form

if you look close enough you can see the paper says Mr. Cogsworth, so he's most likely a teacher