View source
watch 00:59
Who is Dizzy?
Do you like this video?
Play Sound

“I can't believe that I get to live with you in your very own castle!”
―Dizzy

Dizzy Tremaine is the daughter of Drizella Tremaine, niece of Anastasia Tremaine, step-niece of Cinderella and King Charming, and granddaughter of Lady Tremaine. She has several sisters and cousins, one of which is Anthony Tremaine. Dizzy worked sweeping up hair at her grandmother's beauty salon, Curl Up & Dye. A designer and hairstylist, Dizzy longs for the life that Evie is leading in Auradon. Eventually, she is given the opportunity to attend Auradon Prep.

Dizzy was raised in the Isle of the Lost where she works for her grandmother's beauty salon. At sometime, she befriended Evie and idolized her.

Dizzy, unlike her family, is a sweet and loving girl. She enjoys fashion designing, music, and creativity. Evie is whom she always looks up to and admires.

She is a young light-skinned girl with brown hair tied in two messy buns. Dizzy also wears purple cat-eye glasses. She has multi-colored painted nails and wears yellow and black fingerless gloves. She wears a black paint-splattered medium sleeve dress with ruffles around her collar and the end of her sleeves and a paint-splattered deep-blue frock with puffy shoulder pads.

Rise of the Isle of the Lost

Dizzy was told to sweep up hair when Uma, the daughter of Ursula was in the Salon getting her hair done.

Dizzy debuts while doing her sweeping job at Curl Up & Dye. She was listening to "Rather Be With You" when Mal came in and asked for a makeover. Dizzy is excited to help as she didn't have a lot of chances to show her ability. Mal paid Dizzy for doing a good job, but Harry came in and stole the money.

Later on, Evie and Mal returned to the salon to make smoke bombs. Dizzy shows Evie the scrapbook that she has collected. Dizzy gave Evie all the accessories that she made with the hope that Evie would wear them so Dizzy would feel as if she was in Auradon herself. Evie then realized that Dizzy deserved a lot more and that she should be given a second chance.

While on Auradon, Evie decided to make Dizzy's wish come true and wore the tiara that the little girl made. Back on the Isle of the Lost, Dizzy watched the live feed and screamed in excitement when Evie publicly announced her name. Lady Tremaine got annoyed and told her to knock it off.

In the end, Ben followed Evie's suggestion and sent a few guards to the Isle of the Lost to personally deliver the invitation to attend Auradon Prep to Dizzy. The girl screamed in excitement and hugged the guard. 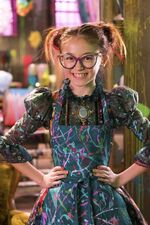