Descendants Wiki
Register
Don't have an account?
Sign In
Advertisement
in: Characters, Male Characters, Isle of the Lost Characters,
and 3 more

Dopey is a character in the Disney Channel Original Movie Descendants, he makes a cameo in the first film. He is one of the heroes and he is also the father of Doug. He is also one of the dwarfs in the movie, Snow White and the Seven Dwarfs.

This little mute man is one of the dwarfs who agreed to hide Snow White from the Evil Queen. When she was saved by the prince, he moved on.

Dopey appears in Ben's coronation along with his unnamed wife.

In Snow White, he wears a green robe and a purple hat and brown shoes. In Descendants, he has a red vest, a blue tie, and appears to have glasses.

Diamonds in front of Dopey's eyes 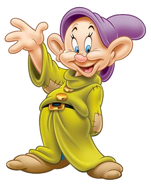 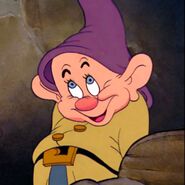