Celia (younger daughter)
Unnamed mother (mentioned in, Friends on the Other Side)

The Princess and the Frog
Descendants 3

“You should've taken my deal, now you will spend the rest of your life being a slimy little frog.”
―Dr. Facilier to Tiana

Dr. Facilier is one of the villains brought back to life to be imprisoned in the Isle of the Lost. He is the founder and headmaster of its school, Dragon Hall. He has two daughters named Freddie and Celia.

The Princess and The Frog

Dr. Facilier is first seen striking a deal with a bald man who wishes to grow hair on the busy streets of New Orleans. So, Facilier makes hair grow over his entire body, frightening both civilians and the man himself, amusing Facilier to the highest degree. However, Facilier's joy is short-lived when he witnesses just how much wealth is owned by Eli "Big Daddy" La Bouff, the richest man in New Orleans, as he gave a huge amount of cash to the newspaper boy after receiving the newspaper. The envious Dr. Facilier and his shadow look in disgust, knowing there must be a way to make themselves just as wealthy as Eli. Later on, Facilier overhears a waitress named Tiana and Big Daddy's daughter, Charlotte La Bouff, talking about a prince coming to town who is due to marry the latter. Facilier gets an idea from the information heard. Once Prince Naveen and his overworked valet Lawrence arrive, he takes them to his parlor to strike deals. For Naveen, the doctor promises to give all the freedom and green his heart's desire, while with Lawrence, he offers him to have the chance to be in Naveen's shoes to get a spot in the limelight for once.

With a handshake, the deal is complete. However, when Naveen figured Dr. Facilier meant wealth when he promised to give green, the doctor actually tricked the prince and magically transformed him into a frog and imprisoned him. As for Lawrence, he became a recruit for Facilier's plot to become incredibly wealthy and dominate New Orleans. Facilier gives Lawrence a talisman filled with Naveen's blood, which allows Lawrence to magically transform into an exact copy of the Prince, thus impersonating him. In Naveen's place, Lawrence is to marry Charlotte. Once they marry, Facilier plans to murder Big Daddy via a pin in a voodoo doll, thus having the fortune handed over to Lawrence, the heir through marriage. Together, the two villains would split the money sixty-forty, with Lawrence getting the smaller sum. With La Bouff's fortune under Dr. Facilier's control, the witch doctor would become the most powerful man in the city, as money is what grants power and authority, in New Orleans. That night, at Charlotte's masquerade ball, Lawrence in disguise meets the wealthy debutante and they immediately hit it off, making Facilier's plot that much is closer to completion.

Meanwhile, Naveen manages to escape and heads off. He soon meets Tiana, whom he believes to be a princess. However, she was merely wearing a costume in honor of the party. But following the storyline of The Frog Prince, Naveen asks the girl to kiss him, which she reluctantly does. As a result of not actually being a princess, Tiana also becomes a frog. Furious, Tiana attacks Naveen and the two end up on the ball's dance floor, causing havoc as they escaped the party and accidentally ending up in the bayous of New Orleans. Facilier was secretly attending the ball as a clown, as well, and watched in anger as Naveen escaped. The furious witch doctor confronts Lawrence on the matter, who begins having second thoughts about the villainous scheme. Lawrence then tore off the talisman, telling Dr. Facilier to wear it instead, and casually threw it. Panicking, Facilier managed to catch the talisman before it hit the floor, warning Lawrence that he can't risk it being destroyed. Calming down, he demonstrated that his own voodoo doesn't work on himself by wearing the talisman. Facilier manages to persuade the former valet to continue going along with the plan, assuring that all will be well so long as they have Naveen's blood in the voodoo talisman. The next day, however, the blood begins to run out and Lawrence's Naveen disguise is abolished. Facilier must now ask for help from his "friends on the other side". While glaring at him, his "friends" silently ask what they would get at the bargain which Dr. Facillier nervously understood. Promising the souls of New Orleans' innocent citizens as tokens of gratitude, Facilier is given a team of shadow demon henchmen by his "friends" to go out and capture Naveen.

As the night of the wedding arrives, Lawrence remains hidden within the La Bouff's guest quarters alongside Dr. Facilier and his shadow, who fearfully and frustratingly laments the fact that his life is in danger should the plot fail, losing his patience with both Lawrence and the shadow demons' delays. Suddenly, the demons return, and with Naveen in their possession. Facilier captures the prince within his grasps and forcefully holds him down as Lawrence steals back the blood and stores it in the talisman, restoring the power of his disguise. The wedding ceremony occurs that night at Mardi Gras. Facilier waits in the shadows, watching closely as Lawrence and Charlotte are about to be pronounced husband and wife. With a voodoo doll of Big Daddy at hand, Dr. Facilier plans on stabbing the voodoo doll in the heart, thus killing Big Daddy and handing the fortune down to Lawrence as planned. Fortunately, Naveen escapes yet again and prevents this. The talisman is obtained by Naveen and given to his friend Ray the firefly. Facilier and the shadows chase after Ray while Naveen is being held captive by Lawrence. Ray manages to give the talisman over to Tiana, telling her she needs to keep it away from the Shadow Man. Tiana escapes with the talisman whilst Ray attacks the shadow demons to buy her time. Unfortunately, Facilier catches Ray by surprise and swats him out of the air, stunning him. Facilier then crushes Ray under his shoe, fatally wounding him. With him out of the way, the Shadow Man and his legion of demons head onwards to Tiana.

Facilier and the shadows have Tiana cornered, soon enough. However, she threatens to destroy the talisman, prompting Facilier to quickly make an attempt to strike a deal. He tries to manipulate Tiana into handing over the talisman in exchange for granting Tiana's dreams to open a restaurant. Though Tiana was against the deal, Facilier settled on the subject of Tiana's deceased father, telling her that his dream to open a restaurant never came true, but by accepting the offer, she could make it happen. The discussion of James actually backfires on the evil doctor after Tiana realizes that, while her father didn't get what he wanted, he had love, and never lost sight of the fact that it was what's truly important, declaring she'll always remember the same, thus denying Facilier's deal.

Subsequently, Tiana attempts to destroy the talisman, but Dr. Facilier's living shadow grabs it and hands it back to the doctor. A sadistic Dr. Facilier then transforms Tiana back into a frog before taunting her for refusing to accept his offer and declaring that she will now spend the rest of her life as a slimy little frog. However, Tiana tells him that what frogs are covered in is not slime just mucus then regains the talisman by grabbing hold of it with her elastic, frog tongue, destroying the trinket before Dr. Facilier can stop her. Upon doing so, Facilier falls into a state of immediate panic and frantically tries to recollect the pieces of the broken talisman, just as his "friends from the other side" arrive, announcing their intentions to collect the doctor's soul as punishment for his failure to repay his debt. A horrified Dr. Facilier tries to persuade his former accomplices to provide him with another opportunity to redeem himself and makes an attempt to escape, but the spirits grab hold of his shadow, thus capturing Dr. Facilier as well, subsequently dragging him into the voodoo spirit world, where his soul will be doomed to remain for all eternity. With a flash of light, both Dr. Facilier and the spirits vanish, leaving behind only a tombstone with Facilier's name and horrified face engraved onto it, confirming the witch doctor's death.

He is mentioned by his daughter Freddie that he can remember everyone's death days, but he can never remember Freddie's birthday. He was mentioned again by Freddie when she mentions to CJ Hook that she has already lived in her father's shadow and refuses to live in CJ's shadow.

Dr. Facilier is one of the many villains trapped on the Isle of the Lost. There, he serves as the sinister headmaster of the island's school, Dragon Hall, which he also founded, following his failure to steal the La Bouff's fortune. The intention was to utilize the knowledge of older villains, to teach the younger generation the ways of villainy, and to one day successfully dominate, once their powers are restored. Facilier also served as an inspiration to a plot concocted by Jay, son of Jafar. 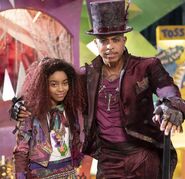 Dr . Facilier and his daughter in Descendants 3