Socialite, Leader of the Wicked Beauties club at Serpent Prep

Drizella is one of the villains imprisoned on the Isle of the Lost. She is the mother of several daughters including Dizzy (who first appeared in Descendants 2) and the aunt of Anthony Tremaine and his sisters.

Before being sent to the Isle of the Lost, Drizella Tremaine was one of the daughters of Lady Tremaine. After Lady Tremaine married the father of Cinderella and he died, Drizella, like her sister and mother, began treating Cinderella not as a step-sister but as a servant or slave. She best demonstrates her disdain for Cinderella when she rips at Cinderella's attire part of which consisted of an item which she had discarded but did not wish Cinderella to have to wear to the ball. Later when the proclamation was made that whomever the lost glass slipper could fit on would be the person Prince Charming would marry, Anastasia tried to convince the Grand Duke that the slipper belonged to her. However when it did not fit, this lie became evident. At some point after Cinderella married King Charming and moved into the castle leaving Drizella, Anastasia, and Lady Tremaine, she along with her mother and sister were sent to the Isle of the Lost for abusing Cinderella. Drizella like her sister has multiple children which leads to the conclusion that while on the Isle of the Lost, Drizella found someone to marry. 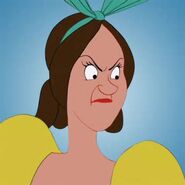