This article is about the episode. For the transcript, see Evie's Explosion of Taste/Transcript.

"Evie's Explosion of Taste" is the first episode of the animated short series, Descendants: Wicked World. It debuted on September 18, 2015.

Evie begs Mal to help her fix the cupcakes she baked for the Heroes and Heroines Festival at Auradon Prep. But instead, their sweet intentions end up in an explosion of taste!

While doing her paintings, Mal is visited by her friend Evie who needs her help and shows her a tray of cupcakes that change color. She tells Mal that she volunteered to make cupcakes for the Heroes and Heroines Festival because she heard that last year everyone loved the ones Audrey made. They were described as an explosion of deliciousness. So she thought that if she made cupcakes of her own everyone would tell her how awesome she is. Only problem is she does not know how to make cupcakes as all the baking on the Isle of the Lost was done by evil minion bakers. When Mal asks Evie about the ingredients she used to make the cupcakes, she tells her that after hearing that baking is the form of chemistry she decided to combine all the periodic elements, including the sulfur.

Evie then asks Mal to use her magic to make her cupcakes better but cautiously says no, as she is trying to be good. Evie points out that using magic for a good cause is automatically good but Mal does not think it works that way. Evie then gets down on her knees and begs Mal to help her until she finally gives in. Mal gets out her spell book and begins to cast a spell that will make Evie's cupcakes an explosion of taste. But because of Evie's interruption, Mal accidentally turns her cupcakes into exploding cupcakes. Worst of all, Audrey gets hit by one that gets thrown away by Evie in disgust after tasting it.

Evie with a tray of cupcakes

"I volunteered to make cupcakes for the carnival..."

"...because I heard that last year everyone loved Audrey's."

"An explosion of deliciousness."

"Remember the awesome ones we had at my birthday parties?"

Mal asks Evie about the ingredients she used

"They say baking is the form of chemistry, so I decided to combine all of the periodic elements."

"I probably should have left out the sulfur."

"Magic for a good cause is automatically good."

Evie on her knees

"You're not gonna stop until I help you, are you?"

Mal gets out her spell book

Evie wonders about the taste of her cupcakes

Mal and Evie startled by the explosion

"You didn't let me finish the spell!" 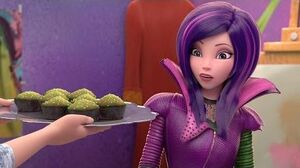