Black (as the Evil Queen)
White (as the Witch)

Her poisoned apples
Her spell book

The Evil Queen is one of the antagonists in the Disney Channel Original Movie, Descendants, but the main antagonist of Disney's 1937 animated feature film, Snow White and the Seven Dwarfs. She is the step-mother of Snow White, and the mother of Evie.

The Evil Queen is portrayed by Kathy Najimy.

Snow White and the Seven Dwarfs

The Evil Queen was once the queen of her own kingdom. One day, she summoned the Magic Mirror asking it "who is the fairest of them all?" When the magic mirror stated some details on the fairest woman, she then learns it's Snow White and sends her huntsman to bring back her heart. After telling her Magic Mirror of Snow White's death, the mirror then replies that she is still alive in the cottage of the seven dwarfs and that the heart she's holding is a deceased pig's heart. She then turns herself into an ugly old hag, makes a poison apple and goes out into the forest and find Snow White. The next morning, she meets Snow White and tells her the apple she's about to give her is a wishing apple and when Snow White eats it and falls dead, the Evil Queen then states that she is now the fairest in the land. The seven dwarfs then chase her up a cliff and when she was stuck in the top into the cliff, she then picks up a stick to pick up an giant stone to kill the dwarfs, but suddenly falls when the lighting strikes in front of her and falls with the stone and gets crushed to her death.

The Evil Queen appears in the Disney Channel original movie Descendants. Here, she is the mother of one of the protagonists, Evie and is portrayed by Kathy Najimy. For 20 years of imprisonment on the Isle of the Lost, she has taught her daughter how to cook, sew and do make-up. Due to her influence, her daughter has an ingrained obsession with beauty and the domestic skills that can entice a husband. She is also said to be the neighbor of Maleficent.

Maleficent always relies on the Evil Queen to open the refrigerator in order to help get her spell book since she has no knowledge on how to open it herself. She plots with Maleficent along with Cruella De Vil and Jafar to use their children to steal the Fairy Godmother's wand so as to bend good and evil to their will. Though she doesn't seem quite as invested as Maleficent, however, she does seem more invested than Jafar. To allow her children to make sure their mission in Auradon is a success, she gives her daughter the magic mirror (apparently smaller than it used to be) to help them find the wand, hoping her daughter could also find a prince to marry as well. She openly still holds a grudge against Snow White for being the fairest of them all, pointing out to the other villain parents that Snow White clearly "had some work done" since the so-called fairest was no longer in her youthful prime.

Fairest of All: A Tale of the Wicked Queen

The Evil Queen appears in the first novel of Serena Valentino's Disney Origin Book. It explains more of the Evil Queen's backstory, it is said that when the Evil Queen was a young girl, she wasn't told by her father how beautiful she was and that her father was once a mirror maker. After the Evil Queen's father died, his soul was trapped in the mirror (becoming the Magic Mirror). The Evil Queen then married the father of Snow White (shortly after Snow White's mother died), who was revealed to be the cousins of the Odd Sisters (Lucinda, Ruby, and Martha). When her husband died, she then became evil and later became jealous of Snow White (for her beauty). It is stated that after she was killed, her soul was trapped in the mirror (just like her father).

In this novel, the Evil Queen and her daughter Evie were banished and cursed by Maleficent after Mal isn't invited to Evie's sixth birthday. Since then, she castle-schooled her daughter. Being banished to the far side of the island, the Evil Queen becomes a little odd, and according to the novel, Evie couldn't help but notice her mother insisted on making declarations just like legendary "magic mirror" as she asked her magic mirror who is the fairest on the island. According to the novel, she only cares about her daughter's beauty and blamed all on her troubles for not being more beautiful than Snow White. The Evil Queen scolded Evie that she didn't put enough blush to win a prince, pinching her cheeks.

As a Witch, The Evil Queen can cast spells and turn herself into a old hag.

The Evil Queen does not appear to be significantly involved in governing her kingdom (since she is solely focused on being the fairest in the land), though the skeletal remains of prisoners in her dungeon points to her being a cruel ruler. She wants nothing more than to be the fairest in the land. She is cold, cruel, and has an extreme vanity that made her utterly intolerant of rivals. Her vanity and jealousy of Snow White's superior beauty and the Prince's attentions eventually drove her to murderous insanity. That she transforms herself into a hideous hag and conjures a poison named "The Sleeping Death" to achieve this end is a sign of her determination and desperation.

The Evil Queen is an icily beautiful woman with a serene, unfeeling face and a slender figure. She is pale-skinned with green eyes, long raven black hair, red lips and seemingly penciled-on eyebrows. Her features and her royal attire create a very stunning and beautiful Queenly image. The Evil Queen is seen wearing a royal blue dress. She wears a black balaclava that covers her ears, neck and hair, leaving her face exposed. The Evil Queen wears a long black cloak that appears to be part of the cowl. The cloak is lined with red inside and the bottom of the cloak is lined with white fur. She has a high white collar attached to her cloak. She also wears a golden pendant that seems to connect with the collar. She also wears orange-yellow high-heel pumps. She has purple nail polish on her fingers. To top off her royal appearance, the Evil Queen wears a golden crown atop her head with five spikes on the front and a jewel on the tip of the middle and tallest spike. The color scheme of her attire represents her pride and vanity. 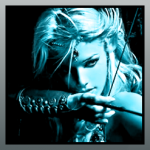