This article is about the episode. For the transcript, see Face to Face/Transcript.

Eric Fogel
"Face to Face" is the thirty-first episode of the animated short series, Descendants: Wicked World. It premiered on February 10, 2017 and is the thirteenth episode in the second season.

Using an antenna on the Tourney field, Zevon continues to transmit his evil spell into the night sky, just as Mal and Evie show up on the scene. Zevon throws a potion at them that creates a crystal wall. As Mal and Evie struggle to climb over, Mal tries to reason with Zevon, but he is not interested. He then adds another jewel to the staff, making it more and more powerful. Once he has combined them all Zevon will have the power to make everyone in Auradon evil.

Mal uses her spell book to cast a levitating spell on Zevon that prevents him from using the antenna to transmit his spell. However, Zevon uses another potion to raise the bleacher from beneath his feet. Evie tries to grab the staff, but misses and falls on Mal. Mal casts a spell that drops suits of armor on Zevon, but dodges them. Zevon fights back by throwing more potions at Mal and Evie, as Mal tells him how he will never get away with his plot, and how out numbered he was. However, Mal speaks too soon when Zevon summons an army of puppets to attack her and Evie.

"Well, if it isn't the evil Isle twins?"

Mal and Evie glare at Zevon

Zevon adds another jewel to the snake staff 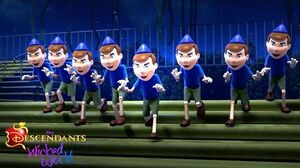