Flora, Fauna, and Merryweather first appear as the invited guests of King Stefan at Aurora's christening. Each fairy intends to give a gift to Princess Aurora. Flora grants her the gift of beauty, while Fauna grants her the gift of song. But before Merryweather can give her gift, Maleficent appears. Insulted by her lack of invitation, Maleficent curses the infant to die, from pricking her finger on a spinning wheel spindle before the sun sets on the princess' 16th birthday. After Maleficent leaves, the fairies tell the king and queen not to despair as Merryweather still hasn't given her gift and she might be able to help using her gift. Although Merryweather can't undo the curse, as Maleficent's powers are far too great, she is able to soften it so Aurora will not die but only enchantingly fall asleep until True Love's Kiss which will break the curse.

Feeling that the princess is still in danger, they decide to raise Aurora themselves. An agreement with Aurora's parents is reached: the fairies will raise Aurora for 16 years until the curse is no longer a threat, and then return her to the palace. They change the princess's name to Briar Rose and hide her in a cottage in the woods. The fairies then decide to hide as mortals, as their magic will raise attention, and disguise themselves as Briar Rose's aunts.

16 years later, the fairies prepare a party for Briar Rose on her birthday. After failing in their attempts to bake a cake (Fauna has never cooked before) and sew a dress normally (with Flora, using Merryweather as the mannequin), they decide to use magic after closing off (almost) every crack except the chimney. Flora uses it to sew the dress, Fauna uses it to bake the cake (and later decorate it), and Merryweather uses it to clean up the room until she is distracted by seeing the dress is pink.

After she starts an argument over the color of the dress by turning it blue, they try changing the dress and each other's clothes to the opposite colors, and the magic blasts fly up the chimney and attract the attention Maleficent's henchman, Diablo. The argument ends when both rays hit the dress at exactly the same time, making it a mixture of pink and blue and Flora was outraged at Merryweather for messing the dress up. As Briar Rose is returning from berry picking, Flora quickly turns it to pure pink and hides. Then Merryweather turns it to blue. After Flora points out that the mop is still running, Merryweather uses her magic to make it stop. Briar Rose, who has returned home from berry picking, is surprised. When she tells her "aunts" about the man she met in the woods, they forbid her from seeing him again. The fairies also reveal her true identity as Princess Aurora, as well as the fact that she's already betrothed in an arranged marriage.

The fairies take Aurora back to the castle and take her to a room. After using magic to create a tiara for her, they choose to leave her alone for some time, so as to allow her time to become used to the revelation. However, they hear a faint sound from the room and, realizing that it is Maleficent enchanting Aurora, frantically try to stop the princess, who keeps following Maleficent (as a will-o-the-wisp) up the tower. They warn her not to touch anything, but Maleficent orders Aurora to touch the spindle to trigger the curse. The fairies arrive too late as they run into Maleficent, who briefly mocks them of their efforts of stopping her. She then reveals the fallen princess, who has pricked her finger, before she disappears.

The fairies initially feel guilty for what they have done, but Flora insists that they put everyone in the castle to sleep until Aurora awakens. However, when putting King Hubert to sleep, Flora learns that the man Aurora met in the woods was actually her fiancé, Prince Phillip. Phillip has previously intended to go to the cottage to meet Aurora, so the fairies race back to the cottage. Upon arrival, they are shocked to discover that Phillip's hat is left behind on the floor. Deducing that the prince has been captured by Maleficent, the fairies decide to go to Maleficent's domain, the Forbidden Mountain, to rescue him.

The fairies sneak into the Forbidden Mountain and witness a group of Maleficent's Goons celebrating the prince's capture by partying around the bonfire. The fairies follow Maleficent, who has been watching the celebration, to the dungeon, where Phillip is chained to the walls. They wait until Maleficent leaves the dungeon to go sleep in her tower, then they free Phillip with Flora melting the hand cuffs, Fauna melting the ankle cuffs, and Merrywether melting the dungeon door lock. They arm him with the magical Sword of Truth and Shield of Virtue, both believed to be weapons of righteousness that will triumph over evil. As Phillip and the fairies exit the dungeon, they are confronted by Maleficent's pet raven, Diablo, who calls the Goons.

The Goons drop giant rocks, shoot arrows, and pour hot oil, but Flora uses her magic to turn them into bubbles, flowers, and a rainbow, respectively. Seeing the goons are unable to stop Phillip, Diablo rushes to Maleficent to warn her of what's going on but Merrywether chases after him and turns him into stone on Maleficent's castle. After escaping the Forbidden Mountain, the fairies aid Phillip by protecting him from various obstacles as they make their way to Stefan's castle. Eventually, Phillip is forced into fighting Maleficent in dragon form. The fairies assist Phillip in retreating, but he is cornered at the cliff and loses his shield. Under Flora's direction, the fairies empower his sword, allowing Phillip to throw it straight into the dragon's heart, finally killing the evil enchantress.

With Maleficent gone for good, Phillip and the fairies enter Stefan's castle and go up to the tower where Aurora is in her enchanted sleep. The fairies watch as Phillip gives Aurora Love's First Kiss that awakens her from that sleep. Lastly, the three fairies go to the throne room, where they watch happily as Phillip and Aurora descend the stairs, reunite with their respective parents, and share a dance. But then, Flora notices that Aurora's dress is blue, and uses her magic to turn it pink. This upsets Merryweather, who turns the dress blue, leading to another argument. The argument continues, with the dress keep alternating colors (pink and blue) as the storybook is closed.

According to Jane, it is said that Flora, Fauna, and Merryweather went to a spa vacation with Aurora's daughter, Audrey. 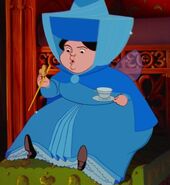 In Wicked World, Audrey has a picture of each fairy hanging on her dorm room wall.