Flotsam and Jetsam were both brought back to life and imprisoned on the Isle of the Lost along with Ursula. Two eels belonging to Jay named Lagan and Derelict are their offspring, but it is unknown which eel is their parent. They both appear in the book, The Isle of the Lost.

Flotsam and Jetsam were loyal henchmen to the sea witch Ursula. They appear watching Ariel and Flounder leaving and Ursula commands them to watch closely on Ariel. After King Triton destroyed all of Ariel's human collection (including Prince Eric's statue), Flotsam and Jetsam tell Ariel that there was someone to make her dreams come true and tells them that, "Ursula has great powers". After Ariel refuses, they later throw the statue's head then Ariel changes her mind to go with them and then takes her to Ursula. As soon as Eric and Ariel were going to have their first kiss (Kiss The Girl), Flotsam and Jetsam later flip the little boat there were in, which causes Ariel and Eric to fall off in the lake, Ariel won't live happily with Eric. They later appear when they try to take Eric but they're later defeated by Sebastian and Flounder. As soon as Ursula was going to kill Eric with the trident of King Triton, Ariel pulls her hair which the trident accidentally killed and destroyed Flotsam and Jetsam. Ursula sadly said, "My Babies, my poor little poopsies".

Flotsam and Jetsam are both brought back to life and imprisoned on the Isle of the Lost along with Ursula. Two eels belonging to Jay named Lagan and Derelict are said to be their offspring, but it is unknown which eel is their parent. 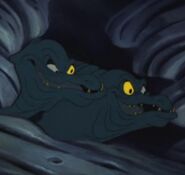 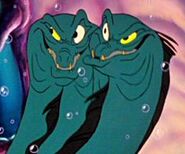