Flounder is one of the heroes of Auradon and one of the best friends of Ariel. He is one of the members of The Council of Sidekicks, along with Ariel's six older sisters. Despite his name he is not a flounder but a tropical fish.

In the film, he is the only character to give unconditional support for Ariel's fascination with human things, and at one point gives Ariel a statue of Eric as a gift. He is first seen after the performance, "Daughters of Triton" with Ariel after sneaking away. When Ariel confesses she is in love with Eric, she strikes a deal with an evil sea witch. Flounder joins Ariel in Eric's Kingdom as she tries to win his heart.

Because he can't survive above water, he is forced to only be able to get news from Scuttle or Sebastian nearby water. He was persistent in asking if they were kissing, showing how dearly he wanted Ariel to get her happy ending and how supportive he was.

Flounder joins Sebastian, Scuttle and other fish in the song "Kiss the Girl". Later, Flounder helps Ariel defeat Ursula who is planning to capture Ariel by battling Flotsam and Jetsam. When Ursula is killed, Flounder attends the wedding and gets a big good-bye kiss from Ariel as she and Eric enjoy their marriage. 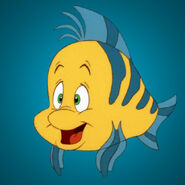 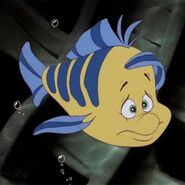