“The Beast will make off with your children! He'll come after them in the night! We're not safe till his head is mounted on my wall! I say we KILL THE BEAST!”
―Gaston to the people.

Gaston was originally a town hero. When he sees Belle, he later takes her book since he tells her that it isn't right for women to read. The next day, Gaston was going to propose to Belle, but the problem was, Belle rejected him and he was so mad that he told LeFou, "I'll have Belle for my wife, make no mistake about that." After Gaston was in the bar, disgraced, Lefou then guides Gaston saying that he needs to put himself together and that nobody could do things like Gaston (Gaston). After Maurice warns Gaston that Belle was taken by a Beast, Gaston and his men think that it was a joke which kicked out Maurice out of the bar.  Later, Gaston comes up with this idea with Lefou. He then calls on Monsieur De Arque, and tells him if Belle doesn't accept his (Gaston) love, then he will lock up Maurice in The Asylum of Loons. When Gaston and Lefou see that Belle and Maurice aren't in the house, Gaston tells Lefou, "They have to come back sometime and when they do, we'll be ready for them." Lefou doesn't move from that spot until Belle and her father come home, which made Lefou stay outside Belle's house until they come back. After Belle and Maurice return home, Gaston is told by Lefou that they've returned. Then Gaston, the mob, Monsieur Arque, and Lefou return to Belle's house to pick up Maurice if she doesn't accept Gaston's marriage. After Belle tells them that the Beast story that his father told them was true (with the mirror), Gaston thinks that she had feelings for the Beast but Belle tells him, "He's no monster Gaston, you are." Then Gaston tells the mob, "The Beast will make off with your children, he'll come after them in the night, we're not safe till his head is mounted on my wall, I say we kill the Beast." Then the Mob marches to the castle and lock up Belle and Maurice (The Mob Song).  After they come to the castle, the mob is attacked by the Beast's servants and Gaston goes upstairs to find the Beast. Later The Beast fights Gaston and then after Gaston was going to kill the Beast, he tells him, "It's over Beast, Belle is MINE!"  Then the Beast holds Gaston and Gaston begs for mercy to live and the beast lets him go only to say to Gaston, "Get out."  After Beast was reunited with Belle, Gaston stabs him in the back and when Gaston was going to stab him again, Gaston later loses his grip and plummets to his death. Belle helps Beast up but abandons Gaston.

"Gaston should be Jealous"

Maleficent mentions him in passing, saying he should be jealous of Jay's muscles when he tried to grab her scepter.

Gaston has been mentioned various times in Descendants 2 by Gil. When Gil meets Ben, he says that his dad is quick, slick and his neck is incredibly thick. After Ben was released by Uma, Gil tells Ben that when he comes back to Auradon, he wants Ben to tell Belle that Gaston said hi to her and to tell Beast that he wished that he could've finished him when he had the chance.

Gaston was introduced as one of the villains brought back to life only to be imprisoned in the Isle of the Lost. He first appears as the father of Gaston Jr. and Gaston the Third. It's unknown who was his wife.

The Beast Within: A Tale of Beauty's Prince

Gaston appeared in this book by Serena Valentino and was given a slightly more sympathetic and tragic portrayal, where it was revealed that he was a former friend of the Prince who would become the Beast. He often hunted with him and hung around the tavern earning the gazes of young women. He was also indirectly responsible for the curse, as he informed the Prince that a woman he was betrothed to, Circe, was a farmer, resulting in the Prince coldly refusing her, as well as her and her sisters deciding to exact revenge by cursing the Prince and his staff. Eventually, Gaston ended up evicted from the castle by the Prince after strange episodes occurred that ruined an attempted betrothal with a princess of a nearby kingdom. Although Gaston did not turn into an object, he was nonetheless affected by the curse in the sense of forgetting his friendship with the Prince. He later ended up attacking the castle, largely due to the manipulations of Circe's sisters who wanted the spell to remain unbroken, and was eventually manipulated into stabbing his former friend in the back after Beast spared him, resulting in his death. 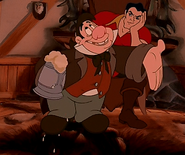