Genie of the Lamp

Genie is a character in Aladdin. In Descendants: Wicked World, he is known as the father of Jordan. He has no appearance in any Descendants media, but he did make an appearance in the Isle of the Lost novel. He is one of the members of the Council of Sidekicks. In Rise of the Isle of the Lost, it is revealed that he is now a teacher atAuradon Prep.

On a dark night, a shady man named Jafar seeks the location of the Cave of Wonders, plotting to use Genie to take control of a nearby kingdom known as Agrabah. Unfortunately for Jafar, only one individual may enter the cave, the "diamond in the rough", who turns out to be a street rat named Aladdin. Jafar manages to manipulate Aladdin into entering the cave to retrieve the lamp for him, but Aladdin's monkey sidekick, Abu, touches a piece of forbidden treasure, resulting in the cave sinking back into the sand and trapping Aladdin inside. There, Abu reveals to have the lamp intact and hands it over to Aladdin, who inadvertently unleashes the Genie. Genie immediately introduces himself as a servant and a friend, one willing to grant Aladdin a total of three wishes—be they food, riches, or any other form of luxury that sticks within the confines of the genie laws. To ensure he doesn't waste any wishes, Aladdin tricks Genie into freeing him and Abu from the cave, which Genie falls for, taking the duo, as well as Genie's Magic Carpet companion, to an oasis in the desert.

There, Genie realizes Aladdin's trickery but quickly gets passed it to return to his job at hand. Aladdin, out of genuine curiosity, asks Genie what the latter would wish for. Though shocked by such a selfless question, Genie takes the opportunity to express his longing for freedom. He explains that he cannot escape his lamp prison unless his master wishes him out. Feeling sympathy, Aladdin promises to use his third wish to free Genie, though the latter finds this hard to believe. Once Aladdin reassures he's telling the truth, an optimistic Genie takes Aladdin's word for it and a promise is set. Next, Genie returns his attention to Aladdin, who confesses that he is in love with Jasmine. While lamenting that only a prince can marry a princess, Aladdin settles on his first wish: to become a prince. Along with new attire, Aladdin is given the alias "Prince Ali" and travels to Agrabah with the accompaniment of an elaborate parade led by a disguised Genie. Though the front is enough to impress the Sultan, Jasmine is less than amused by Ali's flashy nature, disregarding him as another pompous suitor who sees her as nothing but a prize to be won.

That night, Aladdin laments his foolishness, feeling lost as to what more he can do. He asks for Genie's advice, though he merely advises Aladdin to drop the act and be himself, to which Aladdin scoffs, feeling Jasmine would never want to be associated with a mere street rat. Aladdin flies up to Jasmine's balcony on Carpet, making another attempt to earn the princess' attention, but fails again as a result of keeping with the "Prince Ali" persona. Genie disguises himself as a bee to couch Aladdin but is shooed off. Aladdin nevertheless apologizes to Jasmine for his behavior and starts to take his leave, though the appearance of Carpet sparks her curiosity. Knowing Jasmine craves freedom just as much as he does, Aladdin offers the princess a ride on Carpet, to which she accepts. During the ride, the two successfully spark a romantic relationship, but this causes trouble for Jafar, who wishes to marry Jasmine for power. Aladdin is kidnapped by the royal guards per Jafar's orders and thrown into the bottom of the sea. He manages to rub the lamp just before he loses consciousness. A panicked Genie forcefully uses Aladdin's second wish to rescue him, carrying him back to land, thus saving his life. Aladdin warmly thanks Genie, who responds by admitting to having a growing fondness for the street rat.

Genie then takes Aladdin back to the palace, where Jafar's treachery is revealed. Just before he escapes the Sultan's guards, Jafar notices Genie's lamp hidden inside Aladdin's turban, and subsequently sends his parrot, Iago, to steal it. The next day, Genie congratulates Aladdin on his success, as Jasmine has officially chosen Ali as her suitor. Unfortunately, Aladdin feels unworthy of Jasmine's love, due to the fact that his persona is built on a lie. Genie, however, feels happiness and hopeful that Aladdin would now keep his promise and set him free. Because of his aforementioned feeling of guilt, Aladdin believes he's unable to keep up the ruse without Genie, denying the latter's freedom out of desperation. A downhearted Genie laments his feeling of betrayal, before returning to his lamp, leaving Aladdin to think over his choice. With remorse and selflessness having consumed him, Aladdin makes the decision to tell Jasmine the truth, leaving the lamp behind as he leaves to do so, and allowing it to fall into the hands (er, wings) of Iago.

When Genie is summoned once more, he finds that Jafar is now the master of the lamp. Genie is forced to grant Jafar's first wish to rule on high as Sultan by stripping Jasmine's father of his title and placing the palace atop a high mountain. Aladdin tries to stop Genie, but the latter can only apologize, explaining that he must follow the orders of his new master. Jafar then wishes to become the most powerful sorcerer in the world and uses his new powers to reveal Ali's true identity to Jasmine. To ensure Aladdin doesn't interfere again, Jafar banishes the street rat to the ends of the earth, alongside Abu and Carpet. A helpless Genie can only watch the scene unfold in despair, and just as Jafar assumes control of the world. In the dystopian Agrabah, Genie sits in depressed silence as Jafar continuously tortures Jasmine and her father. Fortunately, Aladdin, Abu, and Carpet return, elating Genie, though he warns Aladdin that he won't be able to assist him. Aladdin makes a stealthy attempt to steal the lamp, but Jafar spots him and attacks. Genie watches helplessly as the two adversaries battle, though he cheers Aladdin on throughout. When Aladdin is cornered, he looks to Genie and gets the idea to trick Jafar into wishing to become a genie, himself. Though horrified by the thought of such a cruel man having all the power in the universe, Genie reluctantly grants Jafar's final wish. Unfortunately for Jafar, the powers of a genie come with a price, and the former vizier is quickly imprisoned within his own black lamp.

Jafar's magic upon the kingdom and its inhabitants are lifted, and a joyous Genie celebrates the villain's defeat by flinging the latter's lamp to the Cave of Wonders, to ensure 10,000 years of imprisonment. Afterward, Aladdin apologizes to Jasmine for lying to her and accepts the fact that they can never be together. Genie watches sadly and urges Aladdin to use his final wish to become a prince again, willing to lose his freedom for the love Aladdin and Jasmine share. Aladdin refuses to continue living a lie, and wishes for Genie's freedom, much to the latter's surprise. Genie undergoes a transformation, losing his shackles and misty tail, symbolizing his newfound freedom. Genie is ecstatic, and eagerly sets his sight on seeing the world, but not before bidding Aladdin farewell, claiming the latter will always be a prince in his eyes. Genie's words prompt the Sultan to abolish the law separating Aladdin and Jasmine, believing Aladdin has proven himself worthy enough for Jasmine's love. Genie joyously celebrates the romantic moment before leaving Agrabah to begin his travels, with Aladdin and Jasmine seeing him off as he does so.

He was mentioned in Descendants when Maleficent mentioned to Jafar that he wants revenge on him and Aladdin. 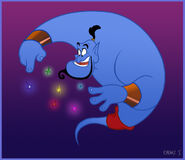