Isle of the Lost (formerly)
Auradon

Lord of the Dead (formerly)

“When you guys try to destroy the world, this is an error in judgement. But, when it's one of us, lock 'em up and throw away the key. Right, Beast?”
―Hades

Hades is the Greek god of the dead, former Lord of the Underworld and Mal's father. With the existence of Mount Olympus, Hades is suggested as one of the villains brought back to life to be imprisoned on the Isle of the Lost. In Return to the Isle of the Lost, this was proven true, as his son, Hadie, was introduced. He was the brother of Zeus and uncle of Hercules. Hades is a minor but pivotal supporting character in Descendants 3.

Hades seeks to overthrow Zeus and rule Mount Olympus - in Ancient Greece - the Earth and the rest of creation for himself. Upon visiting the Fates, he learns that he could succeed by releasing the Titans in eighteen years, but if Zeus's son, Hercules, is to fight Hades, he will fail. Hades sends his demons, Pain and Panic, to kidnap baby Hercules and give him a potion that would render him mortal, and kill him. Hercules needs to drink every last drop for it to work, but the last drop is lost. Thus Hercules, while mortal, retains his god-like strength and spends his life on Earth. Pain and Panic, however, tell Hades that Hercules is dead, hoping that he will not find out.

Later, a young woman named Megara sells her soul to Hades so that he will return her lover's soul. He does, but Meg's lover ungratefully dumps her for another girl shortly afterwards. Meg remains trapped as a slave to Hades, and he uses her beauty, charm and intelligence as an advantage to persuade monsters to join his army. After discovering that Hercules is still alive, Hades sends numerous grotesque beasts to finish Hercules off, only for Hercules to slay every one with ease. When he finds out that Hercules has strongly fallen romantically in love with Megara, he uses this to his advantage and makes a deal with Hercules: Herc must give up his God-like superhuman strength for the next twenty-four hours (secretly the same twenty-four hours he will use to take over Olympus) in exchange for Meg's freedom. Herc agrees, as long as Meg will be safe from any harm. Hades then reveals that Megara was working for him the whole time, crushing Hercules' will to fight. Hades then releases the Titans, who defeat and imprison the gods, and sends the Cyclops to kill the weakened and discouraged Hercules to keep him from getting in the way, but Hercules defeats the monster using his wits.

However, Megara is grievously injured saving Hercules from a falling pillar, negating Hades' deal that Meg would not be hurt. Hercules is thus given his Godly powers back and returns to Mount Olympus where he easily takes down the Titans and frees the gods. Hades loses his temper, but he taunts Hercules that he at least has a parting gift; while Hercules was fighting the Titans, Megara died from her injuries. Hercules travels to the Underworld to rescue her soul and offers himself to Hades in exchange for Megara's freedom. He swims into the River Styx to retrieve her soul. It almost kills him, when his full cosmic Godhood is restored by his being willing to risk his own life to save the woman he loves. Hercules emerges from the pit, alive and immortal with Megara's soul in his arms, much to Hades' anger. Knowing that he can't stop Hercules in his path, Hades begs the hero to try and ease things with him and the other gods, but Hercules angrily punches Hades into the River Styx, where he is swarmed by unidentified souls and dragged to the depths where he is trapped.

In Pair of Sneakers, when Mal and Freddie sneak into the Voodoo Shop to find Mal's crystal, Freddie finds a Hades statue which terrified her.

In Descendants 3, Mal and the VKs try to leave the Isle with the new VKs but, Hades tries to escape as the barrier is closing. Mal turns into a dragon and battles him, but with his ember, he starts to drain Mal of her magic before being forced back inside. It is later revealed that Hades is actually Mal's estranged father which is why she goes to his underground lair to get his ember and was able to convince him when others would not. Mal reignites the Ember and defeats Audrey, who falls under a deep sleep. Mal tries to use the Ember to help, but fails. Mal cannot use the Ember to revive Audrey because she was only half Hades so, she asks for Hades to be brought. In doing so she reveals to Ben, Carlos, Jay, Uma, and Harry that he is her father. Hades is brought to the school in chains and does help revive Audrey for his daughter before being send back but, Mal stops him for a moment to say she loves him so, he secretly gives Mal his Ember. After the barrier is brought down, he crosses the bridge last and asks his daughter and Ben if he's invited to their wedding. Ben greets him nervously as Mal happily runs up and embraces him. Hades then gives the couple his blessing, but while hugging Mal, he scowls at Ben and silently gives him the "I'm watching you" signal. ✌🏻 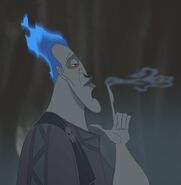 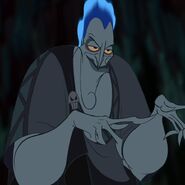 A Statue of Hades 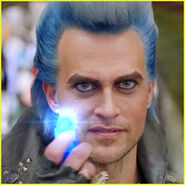 Hades sleeping on the comfy chair

Add a photo to this gallery