This article is about the episode. For the song, see I'm Your Girl (song).

Lonnie has been invited to star in Jordan's web show and Mal and Evie have designed her a glow-in-the-dark outfit for the occasion.

Lonnie has been chosen to perform on Jordan's talent show, and Mal and Evie have volunteered to design her outfit for the occasion. Although Lonnie is grateful, she is however puzzled by the reason of making her new dress in the science lab. Since Jordan and Lonnie wanted it to look fierce, but also welcoming, Mal and Evie plan to make Lonnie's dress cutting edge with the use of chemical compounds. Mal shows Lonnie and Jordan a few designs she drew and scanned onto her tablet. They both like what she has come up with, but believe they can make Lonnie's dress look much more fiercer, and more friendly. Mal knows just the thing, and Evie presents a conical flask full of ex-nuclear waste. Mal tells Lonnie that they're going to use it to make her dress glow in the dark. Lonnie feels uneasy about the decisions Mal and Evie have made in designing her dress, but Evie assures her with these chemicals she will bring the house down. However, she does point out that she could also burn the house down unless she stays away from liquid nitrogen.

It is now time for the talent show, and Jordan is on stage welcoming the cheering crowd. Then after building up the crowd's excitement, she welcomes Lonnie to the stage and she begins her Hip-Hop performance. She is dressed in typical hip-hop clothing, and has her hair tied in a long side braid down her back. The crowd loves her performance, and when Mal and Evie turn off the lights, Lonnie suddenly glows in the darkness from head to toe. The crowd loves her performance even more, and give her a big cheer as Lonnie comes to the finale.

"Of course. Our pleasure."

"You're gonna be so wicked on my web show."

Lonnie has a question

Lonnie and Jordan take a look at some of Mal's designs

One of Mal's designs for Lonnie

"I think we can make it even fiercer."

"I think we have just the thing."

"This is gonna make your dress glow in the dark."

"You want me to perform in the dark?"

"With this stuff, you'll bring the house down."

"But Lonnie is about to drop the mic on y'all!"

Lonnie glowing in the dark 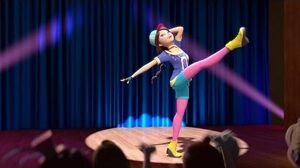