320
The Isle of the Lost: A Descendants Novel is a book that serves as a prequel to the movie, Descendants. It was released on May 5, 2015.

Legend has it that long ago, the most infamous villains were imprisoned on the Isle of the Lost, cut off from the rest of the world as a punishment for their misdeeds. In this dark and dreary place, the likes of Maleficent, Jafar, Cruella De Vil, and Evil Queen reside and evil reigns supreme. Mal, Evie, Jay, and Carlos are their descendants, the teenage sons and daughters of the Isle’s most villainous characters, and they're coming of age on the Isle of the Lost.

Following the events of every Disney film from Snow White and the Seven Dwarfs to Tangled, the fairy tale kingdoms were now free of evil and at peace. Beast and Belle got married, and united the kingdoms into the United States of Auradon; they ruled Auradon as a whole, while other kings and queens ruled their respective kingdoms. Believing villains needed to be punished for their crimes, Beast called upon Fairy Godmother to revive villains who perished and imprison them, still-alive villains, and their minions on an island, which would come to be known as the Isle of the Lost. With a magical barrier to keep them imprisoned and preventing magic from working, the villains were left to build their own kind of society.

Ten years later, a fabulous party is being held at the island's bizarre for Evie, the daughter of The Evil Queen. Evie's laugh is able to make even Lady Tremaine smile; Captain Hook braves sticking his head in Tick-Tock's mouth to make her laugh. Even Shere Khan purrs contently. Watching the festivities from the balcony of her home is Mal, the daughter of Maleficent, jealous at not being invited. Her mother arrives, dismissing the notion of a party; however, she is outraged that her daughter was not invited. Coincidentally, a storm kicks up and Maleficent yells at the crowd, telling Evil Queen to never be seen again or risk her wrath. Mal watched in amusement as both mother and daughter fled in fear.

Mal has become partners-in-crime with Jay, the son of Jafar; they often compete to see who can get the best score. Jay spends most of his day stealing stuff for his father to sell at their shop. They head to school, as Jay informs Mal that a princess will soon be attending school with them. Mal is skeptical of this, while Jay has a vague memory of Evie's sixth birthday party. Evie is told by her mother that Maleficent has likely forgotten about them and it's now safe to leave their castle. She attends school, where she instantly makes the mistake of taking Mal's seat. Scared away, Evie befriends Carlos De Vil, son of Cruella, who is working on a device. Carlos is one of the smarter kids at school, even being one of professor Yen Sid's favorite students for not constantly trying to boast his genius like Reza. Attending her Evil Schemes class, Mal decides to get back at Evie for not inviting her to her birthday party; she orders Carlos to prepare a party at Hell Hall since Cruella is away.

Come the night of the party, Carlos has everything set up, no thanks to Jasper and Horace's bumbling sons. Mal waits a long time for Evie to show up, deciding to trick her into Cruella's closet; however, before Evie can be seriously harmed by bear traps Cruella uses to protect her fur coats, Carlos saves her. To Carlos's embarrassment, Evie discovers he is forced to sleep in his mother's dressing room. Seeing how poorly Carlos is treated, and due to her ten years of isolation, Evie begins bonding with him. They go to his tree house, where he finishes his device; he plans to poke a hole in the dome to get other TV channels. The machine blasts a hole straight through the dome, but it seals back up. Unknown to them, this briefly let magic into the dome and frees Diablo from his stone prison.

Mal returns home, where Maleficent reveals Diablo is back and that her scepter has come back to life. Tasking Mal with retrieving it, Maleficent warns her it curses whoever touches it to sleep 1000 years. Deciding to put a crew together, Mal recruits Jay for muscle and resources, and Evie to touch the scepter and be cursed; when Evie tells Mal about Carlos's device, they learn it's now communicating with something, likely the scepter. Bribing Dr. Facilier, they get access to the school library and get a map of the island, including the territory called Nowhere, where the Isle of the Doomed is. Bribing goblins, the quartet get to the island and past several traps inside the Forbidden Mountain; ironically, they each fit Carlos, Jay, and Evie's fears. They also manage to escape ravenous goblins that devolved in the 20 years they've waited for Maleficent's return. Evie reveals to Mal that Evil Queen didn't invite her to the party all those years ago because she was still bitter the villains chose Maleficent to lead them; being royalty, the Evil Queen thought it was her role to take.

Finding the scepter in Maleficent's old throne room, Mal almost lets Evie become cursed, but is taken over by her inner goodness and grabs it before her. The scepter releases a flash of light that knocks Mal out; it also vanishes. Mal dreams of her mother cursing Aurora; Mal realizes that her mother was simply lashing out because she felt hurt at not being invited. She awakens, realizing being of Maleficent's bloodline made her immune to being cursed to sleep 1000 years. The quartet are given a ride home by goblins who wish to go live in Auradon; the goblins have sent letters to their dwarf cousins, asking for help. When each of them gets home, their parents are disappointed in them. Maleficent is also revealed to have sent Diablo after Mal and had him bring the scepter back to her. Mal, Jay, Evie, and Carlos decide to be friends from that day onwards, causing chaos and panic for everyone else.

Elsewhere, in Auradon, prince Ben, son of Beast and Belle, is tasked with listening to the complaints of the royal council; they are compensated little for all their hard work for the royalty of Auradon. The meeting soon gets out of control with the councilors arguing with each other, and Ben blows it by losing his temper and yelling for order. With his parents taking care of apologies, Ben seeks advice from his girlfriend princess Audrey. However, she plans a picnic for them instead; as she sings "once upon a dream" , Ben realizes neither of them truly knows the other. Furthering Ben's confusion is repeating dreams about the Isle of the Lost and Mal; at the same time, Mal also dreams of having a picnic with Ben. Remembering his mother telling him to take into the perspectives of others, Ben meets with Grumpy and both come to agreements about the grievances of the councilors.

Now having a better perspective on the lives of others, prince Ben realizes that the children of the villains imprisoned on the isle of the lost have had no real say in how to live their lives. He heads off to tell his parents of a wonderful idea he has... 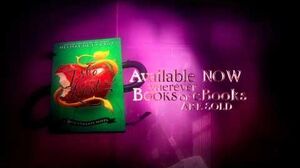