Jennifer Veal was born in Coventry and began dancing at the age of five. A child actress who first appeared on stage, she played the role of "Baby June" in Gypsy at the Warwick Arts Centre, Coventry aged 10. At 11 she made her West End debut in Chitty Chitty Bang Bang at The London Palladium, working with stars such as Michael Ball and Wayne Sleep and at 12 was offered a place at the Sylvia Young Theatre School, London.

Although this meant living away from home on weekdays, she pursued her dream and has never looked back. She has worked with Elton John & Tim Healy (opening cast of Billy Elliot) and Il Divo (Royal Variety Performance 2005) to name but a few. She starred in Disney Channel UK's As the Bell Rings as "Lucy". Veal has a recurring role on Disney Channel Original Series Jessie, as Agatha and Angela, in one episode of the series.

She started a YouTube Channel called "jenniferveal28" in 2012 where she makes comedy videos. She has also been best friends with actor/internet personality Lucas Cruikshank. Their channel, Lucas and Jenny, now back to being Lucas, has over 2 million subscribers. Since then she has moved back to her old channel, "jenniferveal28" since moving out and has over 200,000 subscribers there. 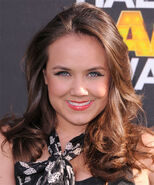