The Evil or Wicked Stepmother
The Wicked Grandmother
Granny (by Dizzy)

Isle of The Lost

Lady Madonna Tremaine is one of the villains that was set to appear in Descendants 2 (although only her voice is heard). She is the grandmother of Dizzy Tremaine and the mother of Anastasia and Drizella. She is the teacher of Evil Schemes and Nasty Plots at Dragon Hall and the owner of Curl Up & Dye.

Once she married an unknown man and had two daughters named Anastasia and Drizella, but when they were seven and eight they lost their father and she married again with a rich man with a daughter Ella. When he died she started abusing Ella as a maid, calling her Cinderella, and spilled all the fortune to her ugly daughters.

On a day when the prince throws a ball and the fortune is all most fully spilled she wants her daughters to charm the prince so one of them can marry him and enrich the family. She promises Cinderella can go as long as she finishes all her chores. Surprised by Cinderella having a beautiful dress and finished all of her chores she smoothly orders her daughters to ruin the dress. Then they all go to the ball but the prince is charmed by another lady who suddenly leaves by twelve leaving a glass slipper. He let the Duke search in all the kingdom after the maiden who fits the slipper. She doesn't want Cinderella to have a chance and locks her up in the tower. After her daughters both fail with fitting and marry the prince she says there is no other maiden in the house to fit the slipper. But then Cinderella comes, freed by the mice Jaq and Gus, and tries to fit the slipper. Lady Tremaine tries to ruin it again by breaking the glass slipper but then Cinderella reveals to be the girl by showing the other slipper that fits, later she marries the prince and they have a son named Chad Charming.

In Descendants 2, it shows a scene where Dizzy gets hyped while she was watching TV, causing Lady Tremaine to yell out, "KNOCK IT OFF", and Dizzy saying, "Sorry Granny".

She appears in Descendants 3.

Lady Tremaine was introduced as one of the villains imprisoned in the Isle of the Lost. She appears as the grandmother of many daughters and sons of her daughters (one of them named Anthony Tremaine). She is also one of the teachers of Dragon Hall with her cat Lucifer as a mascot.

Lady Tremaine has light skin with black eyes and dark brown hair slicked up in a slight curl. But in the third sequel of the franchise's movie, her hair was changed to grey instead of brown. She is notably seen wearing a jade necklace that represents her character, like in the original one. 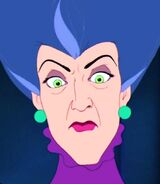 Add a photo to this gallery
Retrieved from "https://descendants.fandom.com/wiki/Lady_Tremaine?oldid=89302"
Community content is available under CC-BY-SA unless otherwise noted.