The Sword in the Stone

Madam Mim is the main antagonist of Sword in The Stone and the Descendants novel, Return to the Isle of the Lost: A Descendants Novel. She is revealed to be the grandmother of Mad Maddy.

After Merlin transforms Arthur into a bird, Arthur finds himself pursued by a hawk and subsequently flees into the woods. He unwittingly perches atop the abode of Madam Mim, ducking into her chimney as the hawk swoops once more at him in a predatory lunge. Arthur surprises Mim with his inadvertent arrival. Mim tries to convince Arthur that she is superior to Merlin, but Arthur remains unconvinced, citing Merlin's benevolence when using magic. This infuriates Mim, being that she sees all good things as bad ("Yes, and in my book, that's bad!"), so she decides to kill him. She captures Arthur, but Merlin appears in a whirlwind and prevents Mim from destroying Arthur by interrupting her. (Archimedes had just previously alerted Merlin regarding Arthur's whereabouts). This results in a "Wizards' Duel" between her and Merlin for the young boy's life. Mim consistently cheats throughout the duel, breaking each of her self-set rules every time she shape-shifts. Merlin initially has the upper hand until Mim turns into a dragon, but Merlin outsmarts her by transforming into a germ and infecting her. She is last seen at home in her bed, recovering from the disease. Merlin advises her to get plenty of rest and sunshine, opening a hole in her roof as he speaks. Mim rants about how much she hates sunshine as Merlin and the other two depart.

Madam Mim was introduced as one of the villains imprisoned in the Isle of the Lost and was revealed to have granddaughters of her own (before Mad Maddy was introduced).

Madam Mim makes her official appearance near the end of the novel. She had found an underground tunnel that led to Auradon, and attacked Camelot Heights in dragon form. Many suspected it to be Maleficent until after much investigation.

Mal's team, Ben, Merlin, and Grumpy stumble across Madam Mim in the dwarf mines, where a battle commences until Ben turns the tide by pointing Excalibur to her chest. Merlin then sends her back the Isle of the Lost. 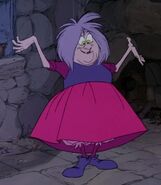