"Mal-lone" is the twenty-ninth episode of the animated short series, Descendants: Wicked World. It premiered on January 27, 2017, and is the eleventh episode in the second season.

Mal and Evie rush to the deserted Jewel-bilee. After being thawed by Lonnie, Ben goes to look for Jay, Carlos, Jane, and Freddie. And when the AK girls (especially Audrey) refuse to accept Mal's apology for what she did, Mal and Evie decide to face Zevon themselves.

Mal and Evie are still in their dorm when they hear panic coming from the Jewel-bilee. The two girls rush to the throne room and find Audrey in despair over her ruined musical number, Ben still frozen in ice with Lonnie trying to unfreeze him with a hairdryer, and Jordan still pinned to a column. As Ally unpins her from the column, Jordan tells Mal and Evie about Zevon and what happened. Nobody knows where he went, so Evie searches with her Magic Mirror, which shows Zevon walking on the Tourney field with Jafar's staff.

Mal gathers everyone around and says they need to work together in order to stop Zevon. However, Audrey remains mad about the bad things Mal did while she was cursed. Mal tries to apologize, but Audrey rudely does not accept it and blames her for ruining the Jewel-bilee. In a way, Mal sadly agrees that it is her fault, but Evie defends her. She points out that the real enemy behind all that has happened was Zevon. He turned them against one another, and on top of it all Jane, Freddie, Jay, and Carlos are still missing. Ben is finally unfrozen and goes off to find them. Mal pleas for everyone's help, but all the AKs refuse because of her recent evil actions. So Mal and Evie go after Zevon alone, but as they make it to the Tourney field, it looks like they might be too late. 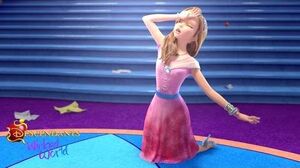