Aliki Theofilopoulos Grafft
"Mash It Up" is the twelfth episode of the animated short series, Descendants: Wicked World, which premiered on December 13, 2015.

The girls are back in Jordan's magic lamp as they discuss the theme for the upcoming dance at Auradon Prep.

Inside Jordan's genie lamp, all the girls are gathered together for tea and a planning meeting. Auradon Prep's annual Fighting Knight's ball is coming up and they need to decide on a theme for the party. Audrey is the first to come up with a suggestion; she suggests a "Pretty, Pretty Princess" theme. However, Ally points out they did that theme three years in a row. Evie suggests on a "Who's the Fairest Party", but Jane finds her idea mean because it would be a competition where the winner will get everything and the loser will get nothing. Lonnie then suggests a "Kick-boxing Hip-Hop Party", and Jane suggests a "Garden Pumpkin Party".

It soon starts to get magical, and each time the girls come up with an idea for the party their idea conjures up around them. The following ideas they come up with are a "Genie Party", a "Fighting Knights Party", a "Party in the Dark", a "Magic Carpet Ride Party", a "Wonderful Wonderland Party", and a "Neon Glow Party". With all these ideas, they are unable to make a final decision on which one to use. So Freddie suggests using all of their ideas. Mal agrees it is a good idea, and pretty soon so does everyone else.

Jordan explains about her genie outfits for Jane, Lonnie, and Ally

"We did that last year."

Mal has an idea for a party theme

"Let me guess. You want everyone to wear purple?"

"What about a who's the fairest party?"

"You want to throw a garden vegetable party?"

"You want a party that celebrates you?"

Freddie suggest they use all of their ideas 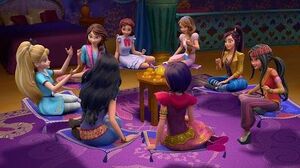