Mrs. Potts is one of the heroes of Auradon and an ally to Beast and Belle. She was indirectly mentioned in Descendants when Beast joked saying "well it was either you or a teapot."

Mrs. Potts first appears after the curse has been put upon her and the castle servants. She first appears on her tea wagon with Chip to serve tea to the sick and weak Maurice who was stranded in the woods. While she and the other Objects are comforting Maurice over Cogsworth's objections, the master of the castle the Beast viciously storms in and takes Maurice to the dungeon. She is the first of the Objects to greet Belle after she makes her sacrifice. She comforts Belle and assures her everything will turn out fine. She is the first to be bold against the Beast and with Lumière tries to help him look like a gentleman which proves to be difficult.

Eventually, Belle easies up to the Beast and the grow a strong friendship. This friendship leads to love but is interrupted when Belle finds that her father is lost in the woods trying to return to the castle alone to rescue Belle. The Beast astonishes Belle by releasing her from their bargain and she hurries to her father. Although Mrs. Potts realizes that the Beast has proven he has learned to love (thus fulfilling his part of the requirement needed to break the spell, she fears that unless Belle can show she loves him in return, it will never be broken.

When an angry mob attacks the castle, the Enchanted Objects come to the defense with Mrs. Potts and her children pouring hot tea on one of the villagers. She witnesses the Beast's death after he was fatally stabbed by Belle's enemy, Gaston. She sheds tears as the spell seems to be permanent until the Beast miraculously revives as a human and she regains her true form along with the other servants. Afterward, as she and Chip watch Belle and Prince Adam dance, she assures her son that they will live happily ever after, and laughs with Maurice when Chip asks if he still has to sleep in the cupboard. 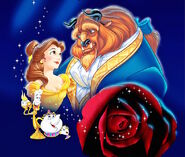