Aliki Theofilopoulos Grafft
"Neon Lights Out" is the seventeenth episode of the animated short series, Descendants: Wicked World. It premiered on July 15, 2016.

After Carlos and Jay finally arrive to the Neon Lights Ball and Ben mysteriously disappears, CJ, the daughter of Captain Hook, reveals herself.

Ben and Mal are still dancing together when Jay and Carlos finally arrive at the party very late. Mal and the girls ask them about where they were, and Jay and Carlos say they were "carpet jacked", which is something that does not usually happen in Auradon. They were getting ready to head out when their carpet was literally pulled out from under them but never saw who did it.

Just then, Jay and everyone else spot's Jane's mascot uniform walking by. At first, everyone thinks it is Jane inside until she walks up to them. As everyone begins to wonder who was in the armor, the lights suddenly go out for a brief moment. When they come back on Ben has disappeared. The girls, especially Mal, look around the party but cannot find him. They come to a stop and think over how this could have happened. Pretty soon, Ally, Audrey, and Jordan start accusing Mal of Ben's disappearance. They think she is plotting something evil against Auradon, and making Ben disappear was part of it. This upsets Mal and reminds them again that she is good now, when suddenly a girl known as CJ, daughter of Captain Hook, swings out of nowhere and onto the stage.

"You just look so cute when you're in pain."

"You know me ever since Daddy and Me jousting class when we were like four."

"How many boys do you know named Jordan?"

"I was being sarcastic."

"We got carpet jacked!"

"That doesn't happen in Auradon."

"We were really worried about you guys."

"I didn't have my chance to pick up my tux."

"And it was awesome!"

"That is a tragedy."

"The rug was pulled from underneath our feet. Literally."

The lights go out

The girls are looking for Ben 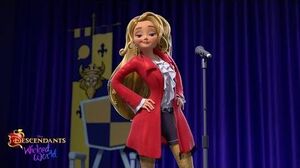