Eric Fogel
"Pair of Sneakers" is the twenty-first episode of the animated short series, Descendants: Wicked World. It premiered on November 4, 2016 and is the third episode in the second season.

Mal and Freddie sneak back onto the Isle of the Lost in hopes of finding Mal’s missing Jewel-bilee gem.

Mal proceeds with her plan in returning to the Isle of the Lost in hopes of finding her birthright jewel. In order to cross the sea and pass through the magical barrier, she hijacks a limo parked outside the Tourney Team field, passing an unsuspecting Jay and Carlos. As she gets into the driver's seat and puts on her seat belt, she is caught by Freddie, who has been following her and wants to accompany her in her little venture. Mal is unable to talk her out of it and so they drive off together to the Isle of the Lost.

Upon arriving on the isle, Mal and Freddie return to the shop owned by Freddie's father. Freddie believes they might find Mal's jewel among the items in the shop, since he was known to hide things from just about anyone. They plan to go in, find the jewel, and get out before anyone sees them. Little did they know that a mysterious figure was tailing them from the shadows. Mal and Freddie enter the store and begin the search. Throughout the shop they find lots of stuff; Statues, dusty books, hats, potion bottles, and lots of skulls, but no Jewel. Pretty soon they make a lot of mess as they went on with their search. Still they cannot find Mal's birthright jewel and they decide to call it a day. Freddie is sorry that they could not find it and gives her some kind of necklace to cheer her up. Then they decide to call it a day and head back to Auradon. However, before Mal catches up with Freddie, the necklace that she was given begins to glow. Then Mal's eyes begin to glow green and suddenly starts to show an evil smirk and a chuckle. 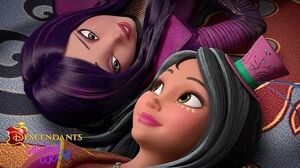 "I cannot believe this is what I've been reduced too."

Mal is surprised by Freddie

"You were not just following, you were listening too."

A statue of Hades

"Do you think your dad's going to notice we were here?"

Mal and Freddie made a mess