Eric Fogel
"Party Crasher" is the twenty-eighth episode of the animated short series, Descendants: Wicked World. It premiered on January 20, 2017 and is the tenth episode in the second season.

Evie, Jay, Carlos, Jane, and Freddie fail to show up at the Jewel-bilee, so Audrey and the other AK girls go on with her musical number anyway. Suddenly, Zevon crashes the Jewel-bilee and, after freezing Ben, steals the VK's birthright jewels so he can rule Auradon.

At the Jewel-bilee, Audrey is getting more and more impatient as Jane and the VKs have still not arrived. Little did anyone know that they were trapped inside a lamp. Lonnie even got a text from Jane, but it was too tiny to read because Jane was too. Finally, Audrey could not wait any longer and decided to start the ceremony without the VKs, as well as her dance number. Starting the music, Audrey, along with Ally, Lonnie, and Jordan begin their performance. However, without Jane, Freddie, Evie, and Mal, it was a bit awkward as Audrey tried to sing everyone's lines. Switching from mic to mic.

Eventually their dance number turned from awkward to disaster as Zevon appeared on the scene. He turned his attention to the Birthright Jewels, only for Ben to stand in his way. Zevon froze Ben in ice and pushed him aside. Then he placed one of the jewel's on the snake staff, making it far more powerful than it already was. Jordan attempts to take the stones from Zevon, but he levitates her and pins her to a column. Zevon reveals he plans to fuse all the jewels together with the staff, making it even more powerful than a magic wand. Then he will have the power to rule over Auradon. He magically disappears and absconds with the stones, leaving only three AKs unscathed. 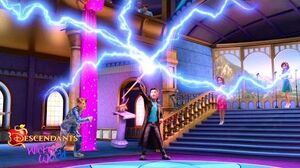