Freddie has a difficult start at adapting to Auradon's unrotten ways, but she is definitely enjoying the food though.

Mal, Freddie, and Evie have just finished Remedial Goodness class. Still new at Auradon Prep, Mal and Evie tell Freddie about the two-hour exam about smiling, which is super important in Auradon. Freddie tries to smile at Evie's request but shows she still has a lot to learn, especially how to smile with her eyes. Just then, Mal smells lunch and the three of them join Ben and Audrey at the buffet table.

At first, Freddie does not seem interested in the food that is served, but after catching the delicious smell she begins to stuff her face with cherry buns. With everyone else watching, Freddie takes a look at what else there is at the buffet table. She finds cranberry sauce, a chocolate fountain, and fruit shaped like little animals. She was enjoying herself so much, that she bumps into Lonnie and drops her pie crust. Instead of apologizing, Freddie tells Lonnie to clear off and she leaves with a huff. While no one is watching, the mysterious stranger reaches out from under the table and takes the pie crust. Mal wonders if she and her friends were ever that bad when they first came to Auradon Prep. Evie denies it, and after claiming they were the picture of elegance the two of them begin to stuff themselves with buns and pie.

"Her hair leaves ten minutes after she does."

Freddie is shown the buffet table

"Okay, give me some of that puffed deliciousness!"

Freddie with her mouth full

"Get your own buffet table." 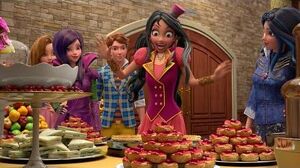