Isle of the Lost Resident

Owner of a Unnamed Salon

In Auradon she appears as a picture with the playing cards that some of the students at Auradon Prep play.

When the Queen arrives, she immediately notices the paint and interrogates the trio, though she doesn't notice Alice just yet. After becoming frustrated with whoever committed the crime, the Queen of Hearts simply sentences all three of her cards to death via decapitation (especially for having blamed each other instead of admitting their own parts). Alice tries to plea for the cards, catching the Queen's attention. However, instead of becoming furious, the Queen of Hearts actually takes a liking to Alice, who tries to explain she's trying to find her way home. When she does, however, the Queen loses her temper, declaring all ways in Wonderland are her ways. She then switches from anger and sweetly asks if Alice would like to join her for a croquet game out of literally nowhere. The game begins and in during which, the Queen appears to be a terrible player, though her card guards and servants merely cheat for her to keep her majesty happy, as well as to keep themselves from being beheaded. In the mix of the game, The Cheshire Cat arrives and purposely gets Alice in trouble by aggravating to Queen, all while keeping his presence a secret, getting the Queen to threaten to have Alice beheaded is she angers her one more time. Eventually, the cat goes a bit too far, and the Queen of Hearts is humiliated in front of all her subjects. Infuriated, the Queen immediately blames Alice for the embarrassment and sentences her to death. The King of Hearts, however, asks the Queen if a small trial could be held first, as it would be fair, and her majesty reluctantly agrees. At the trial, the Queen rebuffs Alice's insistence having the verdict before sentence. Just as she is about to have Alice beheaded, the King insists that the Queen have some witnesses to the incident. The White Rabbit calls the March Hare, the Dormouse, and the Mad Hatter as the witnesses. The trio holds an Unbirthday party for the Queen, but during the party, the Cheshire Cat reappears and sets the Dormouse into a panic. The mouse runs all over, with the characters attempting to pacify him with jam; when the Queen yells "Let me have it!", she is misunderstood and gets it in the face. To add insult and injury, the King of Hearts manages to hit the Queen with the gavel while trying to crush the mouse. The Queen, of course, blames Alice for it and is going to have her beheaded. But Alice eats mushrooms she had procured earlier, which makes her grow bigger. Although Rule #42 says that anyone more than a mile high must leave the court immediately, Alice feels free to call the queen a "fat, pompous, bad-tempered old tyrant." Unfortunately, she subsequently shrinks down to her normal size. As the Cheshire Cat repeats what Alice has said about the Queen to her, she furiously orders "Off with her head!" but Alice flees the trial, with the Queen, King, the card soldiers, and eventually all the infuriated inhabitants of Wonderland in hot pursuit, chasing her out of her own subconscious and as soon as she and the wonderland inhabitants were going to get Alice, they are later erased from existence for good and supposedly revealed to be a dream. 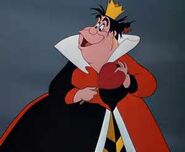 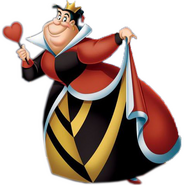