Return to the Isle of the Lost: A Descendants Novel is a book that served as a sequel to Descendants. It was released on May 24, 2016.

"There's no place like home. Especially if home is the infamous Isle of the Lost. Mal, Evie, Carlos, and Jay haven't exactly turned their villainous noses up at the comforts of Auradon after spending their childhoods banished on the Isle. After all, meeting princes and starring on the Tourney team aren’t nearly as terrible as Mal and her friends once thought they would be.

But when they receive a mysterious invitation to return to the Isle, Mal, Evie, Carlos, and Jay can't help feeling comfortable in their old hood—and their old ways. Not everything is how they left it, though, and when they discover a dark mystery at the Isle's core, they'll have to combine all of their talents in order to save the kingdom."

Since the coronation, the lives of Mal, Jay, Evie, and Carlos have never been better; being good has its perks. However, they all soon receive messages that tell them to return home before the new moon. Adding onto the strangeness, Evie's mirror cannot find any of their parents; except for Maleficent, still trapped as a lizard and being held prisoner under the spell jar. At the same time, Auradon has been plagued with unusual weather and a series of earthquakes. Carlos soon tracks his message back to the Dark Net, a website set up by the villains after the hole in the barrier was made; he finds a link to a page advertising the Anti-Heroes Club, which has a picture of them with red "x"s on their faces - the entire island now sees them as traitors. The quartet resolves to head back to the island to uncover the Anti-Heroes club, which is holding a meeting at the Castle-Across-the-Way at 12:00 A.M. Sunday.

At the same time, King Ben has been left in charge of Auradon, while his parents are away on a vacation cruise. He learns of a monster attacking Camelot Heights, but refuses to grant Merlin permission to use magic to capture the creature; instead, Ben decides to go see the situation himself, and then decide whether magic is needed to help resolve the problem. Staking out the next possible attack site, Ben finds that a purple dragon is a perpetrator. However, he cannot be certain that it's Maleficent, somehow able to pretend that she's still captured and under surveillance. He finds a scale belonging to it, deciding the fairies of Neverland may be able to tell him more. Ben returns for Castlecoming, finding Mal and Evie disguised as Audrey and Lonnie, to avoid suspicion, and Jay and Carlos disguised as their driver and bodyguard; they managed to swipe the limo with the remote to open the barrier. After learning about the oddness on the island, Ben allows them to leave.

Mal, Jay, Evie, and Carlos get to the island with no problem but end up crashing and losing the remote. They are met with hostility by the Islanders, due to their new hero status; they also learn that many goblins have been put out of work due to Auradon tightening up security on the barges bringing supplies to the island. Investigating their homes, the quartet learns that their parents are not around and that Maleficent's home has been ransacked. They meet one of Mal's old friends, Mad Maddy, who tells them that the island now considers Mal the new leader as she beat her mother; for this reason, they left Mal's room untouched. Adding onto the suspicion is that Iago was left behind and the overnight bags of The Evil Queen and Cruella De Vil were missing.

As midnight drew, the quartet spy on the Castle Across the Way, following the members of the Anti-Heroes club into the basement. To their surprise, the club is actually teaching it's members how to be good and is lead by none other than Yen Sid. Yen Sid explains that he used Freddie to contact them because of their parents' disappearances, which had coincided with the unusual weather in Auradon. This was due to the magic kept off the island by the barrier being pushed underground, where Maleficent's escape sparked a chain reaction. Evil itself had begun creating new talismans for the villains and crafted a path to Auradon. Hearing the siren call of their former powers, Jafar, Cruella, and Evil Queen went in search of them; however, they've ended up losing the catacombs housing the talismans.

Mal follows Maddy, a member of the group since she's acting oddly; Evie shadows both of them. Lead to Doom Cove, Mal is attacked by Maddy's posse - Anthony Tremaine, Ginny Gothel, and the Gaston twins - as revenge for putting lye in Maddy's hair; Mal and Maddy were called twins when they were younger, and Mal didn't like that. Maddy and Ginny push Mal into the waters but are ultimately foiled by Evie, Jay, and Carlos, who save Mal from drowning and distract Tick Tock Croc's offspring. Realizing that the crocodiles wouldn't be at Doom Cove, the quartet deduce that the cavern entrance is hidden there; the crocodiles are likely guarding it.

Back in Auradon, Ben learns of a purple cobra that attacked Cinderellasburg and ate some livestock. Finding another scale, he takes it and the previous one to Neverland, where the fairies have no luck in finding out where the scales came from, but have concluded that they are dealing with a shape-shifter. As Prince Phillip's sword was wiped clean of Maleficent's blood after the battle, they have no record of her DNA; thus she remains a suspect in the crimes. Ben decides to have a sample of Maleficent's DNA sent to Neverland, to clear her of the accusations. The fairies also inform Ben that more purple scales were founded in a mine that the dwarfs were forced to abandon recently, due to not being able to shake the feeling of an ominous presence. Ben decides to head there and investigate with Merlin, who he grants permission to use magic.

Back on the Isle of the Lost, after a night's sleep, Mal, Jay, Evie, and Carlos head back to Doom Cove and dig out the entrance to the cavern, finding themselves in a bizarre underworld. They find Evie's talisman first, the Fruit of Venom; enticed by how luscious it looks, Evie bites it and has a dream that tries making her believe her friends betrayed her and left. However, she sees through the deception and breaks the poison's hold on her mind. Jay next seeks out the Golden Cobra, which tries to entice him into abandoning his friends and using it to get whatever his heart desires; however, unlike Jafar, Jay isn't greedy and reduces the cobra to a walking stick. Carlos is next forced to face his greatest fear when looking for the Ring of Envy, which is an illusion of his mother Cruella De Vil; though he snatches the ring from her, he refuses to be swayed by the illusion's attempt to goad him into using the ring to control her. Mal has trouble finding the Dragon's Egg, which would replace her mother's scepter; believing it's because she's viewed as weak by it, she shoos away her friends. She finds it, not being enticed at all by its power, being mentally told that a dragon needs to lay on the egg to hatch its powers. However, Mal nearly falls to her death but is saved by her friends.

As the cavern begins collapsing, with it's purposed served, the quartet follows the path out into the dwarf mine, where Mal happily reunites with Ben. It's at that time they meet the culprit behind the attacks - Madam Mim, Mad Maddy's grandmother. Jay, Evie, and Carlos consider stopping Mim with the talismans, but Mal tells them that they would be possessed by the talismans' evil even if they used the powers for a good cause. Ben manages to stun Mim by stabbing her with Excalibur. Merlin seals the cavern and sends Mim back to the isle. With another spell, he sends everyone back to where they belong.

Recuperating from the events, Mal, Evie, Jay, and Carlos are wondering how to destroy the talismans; they considered Merlin, the Three Good Fairies, and Neverland as ideas. However, Ben instead suggests that they should ask Fairy Godmother how to destroy the talismans, but she's currently away for Cinderella's ball. Evie decides to check on their parents again, finding Cruella and Evil Queen back to their usual routines. Mal speculates that they were hiding in the dwarf mine and were sent back to the Isle of the Lost by Merlin's magic. However, when they see Jafar, things are looking grim, as a goblin found the remote to the barrier and is having Jafar inspect it. Luckily, the device is broken thanks to the crash; however, it's only a matter of time till it gets repaired. Mal tells her friends not to worry as they are "the villains you root for in the story". 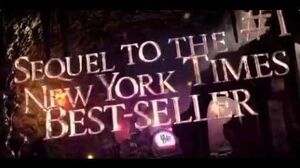 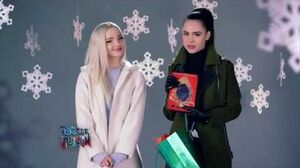