Mowgli's Jungle;(formerly) Isle of the Lost

Shere Khan is among the villains imprisoned in the Isle of the Lost. He appears to smile every time Evie giggled. He has a store called Shere Khan pawn. A powerful Bengal tiger, Shere Khan is considered suave and charming, yet is deeply feared as the most ferocious predator in the jungle. His reputation was such that he needed only to show himself to intimidate his victims. Khan is equally notorious for his animosity toward man, due to his fear of guns and fire. As such, he has vowed to kill any human that steps foot in the jungle.

Shere Khan the tiger makes his first physical appearance while stalking a deer as prey. His hunt was ruined when Colonel Hathi came marching by with his herd and scared it away, much to Shere Khan's annoyance. After Bagheera stopped them, Shere Khan eavesdropped on their conversation and was delighted when he heard about Mowgli, who had managed to escape Bagheera in hopes of staying in the jungle; without the panther at his side, the boy was now devoid of protection. After Bagheera and Hathi's herd separated to locate the man-cub, Khan began his own hunt for Mowgli.

After searching for some time, he heard Kaa seducing a victim and became suspicious. He grabbed Kaa's tail and got him to come down, subsequently questioning him about Mowgli. Kaa acted strangely while answering his questions, and his suspicious behavior prompted Shere Khan to search his coils for Mowgli. When it appeared that Kaa was truthful, Khan ordered him to act as an informative should the former come across the man-cub. Kaa agreed, and Khan took his leave.

Shere Khan's travels eventually led to the wastelands, where he overhears a flock of vultures singing. After investigating the occasion, he found Mowgli and calmly approached the group. Impressed by Mowgli's courage (being that he refused to immediately run at the sight of the tiger), Shere Khan gave the boy ten seconds to run away. Khan became more and more annoyed when he didn't and eventually lunged for the killing strike. Baloo, Mowgli's friend, intervened by grabbing Khan's tail. As Shere Khan struggled to break free of Baloo's grip, the vultures carried Mowgli to safety.

Shere Khan then became furious, battled Baloo, and nearly killed him. The vultures intervened and stalled the tiger while Mowgli tied a burning branch to his tail. Upon noticing, Khan became terrified and frantically tried to put out the fire, but to no avail, forcing him to flee the wasteland with the burning branch still tied to his tail, greatly humiliating him.

Shere Khan is among the villains imprisoned on the Isle of the Lost. Apparently, he had a soft spot for Evie when she was younger, since every time she giggles he smiles. 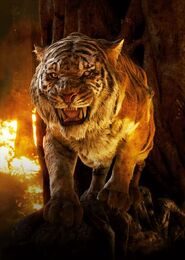