Auradon
Isle of the Lost (formerly)

Squeaky Smee is a son of Mr. Smee and the twin brother of Squirmy. He appears in Descendants 3.

Squeaky is a shy young boy. He also states to be an avid reader.

Squeaky is a twelve-year-old boy with a thin figure. Despite being older, Squeaky appears to be slightly short than Squirmy. His skin is pale, but his cheeks are rosy. His hair is blond and long. He wears a big pair of square glasses. His eyes are blue. He's often seen wearing a red beanie and matching outfits with his twin brother. Throughout Descendants 3, he wears a tattered white-light blue striped shirt and grey denim trousers. He also wears a dark red fingerless glove on his right hand.

Escape from the Isle of the Lost

Both Squeaky and Squirmy were mentioned briefly at the end of the novel by their babysitter Harriet Hook, who grabbed some extra application forms for them. 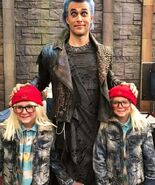 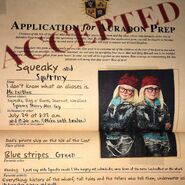