Eric Fogel
"Talking Heads" is the twenty-fourth episode of the animated short series, Descendants: Wicked World. It premiered on December 2, 2016, and is the sixth episode in the second season.

Mal and her new zest for Evil reaches a critical point when she bewitches her friends.

At the buffet table, Mal is helping herself to some food when Audrey shows up to accuse her of being evil. With all the wicked things she has done, she assumes that Mal has only been acting well since the beginning and is furious because she is not getting a jewel. Audrey tries to get her to admit that she is evil, only for Evie to defend her friend. Jay and Carlos getting into the scene as well. Pretty soon an argument breaks out between the VKs and AKs with Mal in the middle of it. Suddenly Mal, becoming possessed again, snaps and casts a spell on everyone's voices, except Evie's. As a result everyone speaks their words in the wrong order.

Just as everyone angrily turns to Mal, Evie tries to calm everyone down. She assures that if they ask nicely Mal will take back the spell, but Mal does not intend to and begins to express how she enjoys being Evil. She then casts another spell on her friends that forces them to dance against their will. Getting the chance, the AKs and VKs start to throw food at Mal, only for her to dodge them and keep dancing. Pretty soon they all end up throwing food at each other and figure out how to undo the spell on their voices by eating. Audrey has now had enough and angrily declares Mal banned from the Jewel-bilee, but Mal does not care and proudly leaves, leaving most of her friends puzzled and worried over the sudden change that has come over her. Jane wonders the same thing and follows Mal to the Museum of Cultural History. Shadowing her, she watches Mal break into the museum and nervously follows her inside. 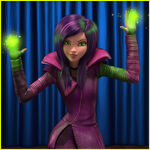 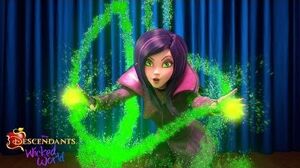