Queen Tiana of Maldonia, Queen of Bayou de Orleans is Naveen's wife and one of Auradon's heroes. She appears at the Royal Cotillion in Descendants 2. She makes a cameo in Descendants as one of the heroes to have an image in the Auradon Cathedral.

Tiana was a waitress who worked two jobs in order to raise enough money to turn a rundown sugar mill into a restaurant, a promise she made to her now deceased father. As a result, Tiana has become absorbed with her work and doesn't have time for anything else. Tiana finds hope when her wealthy childhood best friend Charlotte pays her a lump sum of money to make and serve beignets at a masquerade ball she is hosting for Prince Naveen.

That night, Tiana's hopes are crushed when the realtors of the mill tell her that she was outbid by someone for the sugar mill and that it is probably a good thing given her 'background'. When Tiana accidentally ruins her costume, Charlotte is kind enough to replace it with one of her own. Out of desperation, Tiana wishes on a star, only to be greeted by a talking frog, who claims to be Prince Naveen. Mistaking her for a princess because of her costume, Naveen promises to give Tiana the money she needs if she turns him human again by kissing him. After some persuasion, Tiana finally kisses him, only for her to become a frog like Naveen.

While on the run from hungry gators, Tiana makes a deal with Naveen, demanding that once he marries Charlotte, he will use the money he gets from her to help Tiana buy the restaurant. Things change, however, on their journey to end the spell. They both meet a jazz-playing alligator named Louis and a Cajun firefly named Ray, who help them reach the voodoo priestess Mama Odie. Tiana and Naveen help each other escape from frog hunters and Tiana teaches Naveen to help her cook. As Ray sings an ode to his true love "Evangeline", Naveen shows Tiana how to dance, something that she has never done before because she was afraid to. Both frogs find themselves falling in love with one another, but are unsure how to say it.

Eventually Tiana comes face to face with Dr. Facilier himself, who promises to make her dream of "Tiana's Place" a reality if she hands over a voodoo charm which plays a significant role in his plans. After reminding her of all the work she has done and the people who held her back, he shows her an image of her late father, telling her that she can make sure the dream he never lived to see come true. Seeing her family together, Tiana finally realizes what her father had meant that he never got what he wanted but he had love, what he needed. Tiana is able to smash the charm and leaves Facilier at the mercy of the angry voodoo spirits.

Tiana finds Naveen, who is promising Charlotte that he will marry her but only if she will give Tiana her restaurant. Tiana stops him and finally admits that she loves him. Moved, Charlotte says she will kiss Naveen, "no marriage required", but it is already midnight and she is too late to break the spell. Deciding it doesn't matter whether they're humans or frogs, all that matters is that they stay together, Tiana and Naveen get married in the bayou. Once they kiss, they finally become human again because Tiana is finally now a princess and is shown wearing her princess ball gown. Louis "terrifies" the realtors into accepting Tiana's offer. Together, Naveen and Tiana build the restaurant, now named "Tiana's Palace", dance under the stars, and live happily ever after. 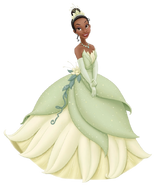