Tick-Tock is one of the characters imprisoned in the Isle of the Lost.

He was mentioned in Descendants: Isle of the Lost.

He also has descendants called the Crocodile Descendants which is revealed in the book, Descendants: Return to the Isle of the Lost.

Before the Isle of The Lost

Captain Hook laments Peter Pan's role in causing the crocodile to follow him, due to Peter cutting off his hand and throwing it to the crocodile. Tick-Tock found it so delicious he's following him everywhere for another taste. Tick-Tock suddenly shows up next to the ship. Hook hears the clock ticking and his eyebrows and pointing mustache begin twitching in rhythm (with the music of "Never Smile at a Crocodile"). The crocodile's eyes begin popping up to the tune, sending Hook into a panic. The crocodile then emerges from the water onto a rock rubbing his belly and licking his lips, accompanied by a wide smile towards the captain. Hook then screams for Mr. Smee to save him, and Smee shoos off the crocodile. The crocodile then frowns and wiggles his tail to the ticking clock while sulking away.

Later, when Captain Hook and Mr. Smee kidnap the Indian princess Tiger Lily to take her to Skull Rock, the crocodile follows them in the rowboat tick-tocking right behind them (with the music of "Never Smile at a Crocodile") again, actually stopping to smile at the camera and then follow the rowboat again. In Skull Rock, Hook soon finds himself hanging from a cliff while fighting Peter Pan. Peter hears the ticking and smiles at Hook, saying, "I say, Captain, do you hear something?" Hook hears the sound, with his eyebrows and pointy mustache twitching in rhythm (with the music of "Never Smile at a Crocodile") again. Hook looks down at the water as he shakes with fear. The crocodile approaches with his eyes popping with up to the tune again, looking delighted to see a golden opportunity to eat the Captain. He jumps up and bites off Hook's coat, devouring it. Peter asks the crocodile, "Hey, Mr. Crocodile, do you like codfish?" to which he happily nods his head to say yes. "You DO?" Peter replies, much to Wendy's horror. The crocodile leaps again and manages to pull Hook right into his mouth, but Hook is able to escape the crocodile. The crocodile makes several attempts to swallow Hook, eventually chasing him back to the Jolly Roger. Later that night, Tick-Tock circles the water outside Hook's ship, licking his chops.

In the end, Tick-Tock is ready to eat Hook at the end off of the plank, but Hook climbs back up, which annoys Tick-Tock. The crocodile watches Peter and Hook have a sword fight while twiddling his finger in the water. He is dancing in the water while Wendy and the boys sing "Hook is a codfish." When the Captain falls in the water, Tick-Tock begins pursuing Hook again. He ends up chasing Captain Hook away from Never Land. 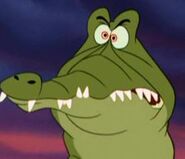