Eric Fogel
"Trapped" is the thirtieth episode of the animated short series, Descendants: Wicked World. It premiered on February 3, 2017 and is be the twelfth episode in the second season.

Audrey finally learns the truth about Mal's birthright jewel and her change in personality, but Carlos, Jay, Jane and Freddie fail to escape Jordan's lamp.

While cleaning up the throne room, Audrey is sitting on the steps still upset about her ruined musical number. It was going to be a special gift to the VKs, and now everything was ruined. She blames the VKs for it, but Ally says otherwise. Based on what Jane had told her, she explains to Audrey that Mal was under a spell caused by her cursed jewel, which was why she did all those bad things. Hearing this leaves Audrey very ashamed of herself: she accused Mal for all the chaos that was not really her fault and she wrongly banned her from the Jewel-bilee, but Ally tells her that it is not to late to make things right.

Meanwhile, Jay, Carlos, Freddie and Jane remain trapped inside Jordan's lamp with no clue on how to get out. Just then, Jane has a plan and tells everyone to gather up some pillows. Then using her magic she turns them into floating stairs for them to climb to the top of the lamp. However, Jane needs to concentrate in order to keep the pillows floating. So far everything goes well as Jay and Carlos climb to the top until Jane becomes distracted by Carlos. She loses her concentration and the pillow staircase collapses beneath Jay and Carlos' feet. They fall to the ground with Jay landing on top of Carlos. Because that is the best Jane can do, she believes they are all doomed. 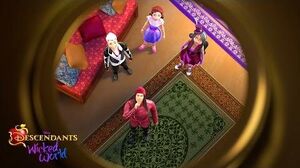