Eric Fogel
United We Stand is the thirty-second episode of the animated short series, Descendants: Wicked World. It is premiered on February 17, 2017 and is the fourteenth episode in the second season.

Audrey, Lonnie, Ally, Jordan and Ben join together with Mal and Evie in their battle against Zevon.

Mal and Evie become surrounded by Zevon's evil puppet army, when suddenly the AKs arrive on a magic carpet. The AKs take on the puppets, while Mal takes the opportunity to get Jafar's staff away from Zevon and stop his evil plans. During the fight, Zevon turns Audrey into a duckling, and Carlos, Jay, Jane and Freddie are free from Jordan's genie lamp. Using a levitating spell from her spell book, Mal flies to the floating bleacher that Zevon is on. He is about to place on the last jewel, when Evie blinds him with light from her mirror long enough for Mal to get her hands on the staff.

Just when all seems victorious, Zevon brings out Mal's jewel which turns her evil again. Possessed by the curse, Mal almost gives back the staff to Zevon until Evie knocks the jewel out of his hand, using her tiara as a boomerang. Back to normal, Mal knocks Zevon's potions out of his hand, which smash right in front of him and freezes him in ice. Mal then uses the staff to restore everything. She renders the puppets lifeless, changes Audrey back into a human, and lands the bleacher. As Ben drags Zevon away, Mal uses the staff to lift the curse from her jewel and now it is time for the Jewel-bilee. 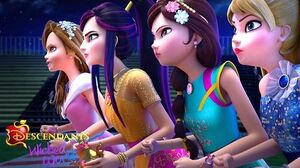