Ursula is voiced by Whoopi Goldberg in Descendants 2.

Ursula was an evil sea witch. She was banished and exiled from Atlantica by King Triton and commands Flotsam and Jetsam to keep an extra close eye on Ariel believing that she is the key to Triton's undoing. After Ursula realizes that Ariel has fallen in love with Prince Eric, she believes that Ariel will make a good spot on Ursula's garden (the merpeople turned into polyps by Ursula). After Flotsam and Jetsam take Ariel to Ursula, Ursula makes a deal with Ariel by saying to her if she kisses Eric by sunset on the third day, she will remain human but if she doesn't she'll transform back into a mermaid and will belong to Ursula and tells Ariel that in order to become human, she needs her voice (Poor Unfortunate Souls). She later takes Ariel voice and transforms her into a human. After Flotsam and Jetsam disturb Ariel and Eric's moment (Kiss the Girl), Ursula decides to transform into a human herself and renames herself Vanessa. She later uses Ariel's voice so she can make Eric believe that she was the one who rescued him from the shipwreck and make Ariel be her prisoner. After she was going to marry Eric, she was later distracted and disrupted by Scuttle, and the rest of the sea animals and after Max (Eric's dog) bites Vanessa, Scuttle pulls her necklace and releases Ariel's voice and returns to Ariel.  After sunset, Ariel transforms back into a mermaid and Vanessa turns back into Ursula and kidnaps Ariel only to be stopped by King Triton and Sebastian. Triton later sacrifices himself to Ariel and becomes Ursula's weed, then Ursula takes his crown and his trident. After she was cut by Eric, she sends Flotsam and Jetsam to take down Eric but was later defeated by Sebastian and Flounder, and when Ariel pulls her hair, she accidentally kills Flotsam and Jetsam which makes Ursula say, "My Babies, my poor little poopsies".Then Ursula later turned into a giant monster and tries to kill Ariel and releases the powers of the ocean. She is then killed by being stabbed by Eric with the ship and she is later destroyed and with her powers gone, all of her other victims were transformed back to themselves. After the trident lands by King Triton, he transforms back into a merman and gets his crown back.

Ursula makes a voice over cameo in Descendants 2. She unleashes one of her tentacles on the pirate gang and yells at them and her daughter Uma after the gang performed What's My Name, shouting at them to be quiet and tells Uma that the dishes are not gonna get themselves washed. She often likes to stay home and watch soap operas. Ursula is then mentioned by Uma and tells Ben that Ursula doesn't care for her unless she needs somebody for the night shift at Ursula's restaurant, Ursula's Fish and Chips.

Ursula was introduced as one of the villains brought back to life to be imprisoned on the Isle of the Lost. She first appears when she chases Ratigan and his crew off her Fish and Chips store.

Rise of the Isle of the Lost: A Descendants Novel

Ursula is only mentioned in this novel as her daughter, Uma, is one of the main characters. When Uma was a child, Ursula gave her daughter a piece of her necklace, which Uma wore it inside a locket. Ursula still owns her shop, but she rarely shows up as she prefers to stay home and watch Auradon soap operas. She sees her own daughter as ungrateful and useless because of how often Uma has lost to Mal.

Escape from the Isle of the Lost: A Descendants Novel

when Mal is looking for Uma on the Isle, she sees Mal at her doorstep at her cottage. They have a pretty brief conversation alongside she's not happy to see Mal and tells her she hasn't seen Uma, but only saw her on TV when Uma and Mal were battling out during the Cotillion (at the climax of Descendants 2). Ursula tells Mal that she was very proud of Uma for that she put up a great fight against Mal. Mal ignores Ursula's cheering for Uma. Mal then seems nervous talking to Ursula as she backs away from the old sea witch, hoping she won't get hit by her tentacles. Ursula then slams the door at Mal. Then Mal continues her search for Uma.

As a Sea Witch, Ursula can practice Sea Magic and cast spells. 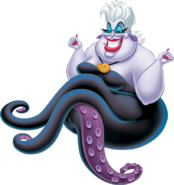 Ursula in her human disguise

Add a photo to this gallery

Retrieved from "https://descendants.fandom.com/wiki/Ursula?oldid=92077"
Community content is available under CC-BY-SA unless otherwise noted.