Under The Sea: A Descendants Story

Ursula and her descendants.

Ursula's necklace is a magical item owned by said Sea Witch and it seems like it only works for those related to her by blood. Uma wears the gold nautilus shell around her neck via a golden chain.

In Descendants 3, Uma used it to hold Hades' Ember from Mal.

In The Little Mermaid, Ursula used it to store Ariel's voice. She later used it to sound different and brain-wash Eric. After it broke Ariel almost won their wager.

In Rise of the Isle of the Lost, Uma has her "crew" help her find all of its pieces of the item all around the Isle.

In Descendants 2, Uma uses it to grow tentacles to look as threatening as her mother.

In Under the Sea, the necklace played a major role. It was first seen glowing around Dizzy's neck, and it allowed Uma to talk to Mal through controlling Dizzy, Harry, and Gil.

In Descendants 3, Uma uses the necklace to give her the power and ability to cast spells, much like her mother, especially when converging with Mal and her powers.

As seen in The Little Mermaid. 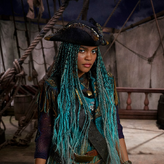