Eric Fogel
"Wild Rehearsal" is the twenty-second episode of the animated short series, Descendants: Wicked World. It premiered on November 11, 2016, and is the fourth episode in the second season.

Mal’s evil ways cause chaos as Audrey, Jane and the rest of the girls rehearse for the big Jewel-bilee performance.

After her unsuccessful attempt in finding her birthright jewel, Mal returns to Auradon the following night. She returns to the Tourney Team field where Evie was waiting for her. She can see that Mal is very upset for not being able to find her jewel and wonders if she would like to talk about it, but Mal prefers to have some space and sadly walks away. Meanwhile, the same mysterious figure who tagged Mal on the isle appears far behind Evie under the bleachers.

The next day, everyone is gathered on the stage to rehearse the song and dance number for the Jewel-bilee, with Audrey in charge of the preparations. Audrey starts off the rehearsal by demonstrating her dance moves they will be learning for the act, but while nobody is looking, Mal becomes possessed as her eyes suddenly glow green once again. She secretly takes out her spell book and casts a spell on Audrey that makes her dance out of control. Audrey ends up hitting Freddie in the face and stepping on Jordan's foot. Then dancing backwards, she collides into Lonnie, Ally, and Jane who all fall off the stage.

Mal jokingly comments on Audrey's performance, only in return for her to angrily accuse Mal for magicking her. However, nobody else believes it had anything to do with Mal since they all knew she was not evil anymore. Evie on the other hand believes it was and takes Mal aside. Although admitting it was funny, she strongly advises her best friend to chill and not to get between Audrey and her show. Mal agrees to do so, but as she walks away her eyes glow once again as she shows an evil smirk. Later on, Audrey has put the rehearsal incident aside and is determined to stay focus on her preparations for the Jewel-bilee, but when she returns to her dorm with Jane, she discovers in horror that her room has been vandalized with Mal's graffiti artwork. 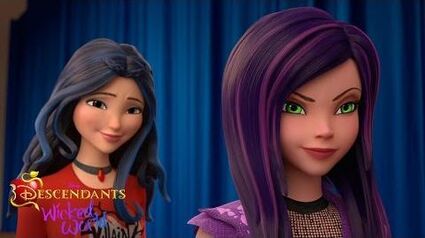