Descendants Wiki
Register
Don't have an account?
Sign In
Advertisement
in: Characters, Male Characters, Isle of the Lost Characters,
and 5 more

Yen Sid is a teacher of Weird Science at Dragon Hall on the Isle of the Lost. He went there on King Beast's request to teach the villain kids. He is the founder of the Anti-Heroes Club.

Yen Sid was a powerful sorcerer who had an apprentice, Mickey Mouse. When Yen Sid left, his apprentice later took his hat to learn magic from himself, after Mickey brings a broom to life and to do his job. It ended up filling the whole room with water. Yen Sid returns an stops the chaos and realizes that it was his apprentice's fault and sends him back to work.

Descendants: Isle of the Lost

Yen Sid resides on the Isle of the Lost as the science professor of Dragon Hall. He was sent on behalf of King Beast to teach the next generation of villains how to live without magic and using science instead. Despite leaving Auradon, Yen Sid takes the obligation in stride and eagerly teaches the students, good or bad.

Return to the Isle of the Lost

Yen Sid founded the Anti-Heroes Club after the four villain kids settled down in Auradon. When unseasonal earthquakes and storms occur around Auradon, Yen Sid sensed a powerful source of the magic underground and had his kids send messages to lure the four back. Once returned, Yen Sid told them what he'd learned and urged them to find the Talismans before they land in the wrong hands, while also giving them important advice. 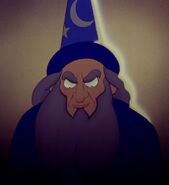