“Well, he ain't getting any deader! ”
―Yzma at Kuzco's "funeral"

Yzma is one of the villains imprisoned on the Isle of the Lost. She is now the mother of Yzla and Zevon.

Yzma was once the adviser to Emperor Kuzco, but she is fired after several years on the job for being too old and for taking over some of the king’s duties. She then comes up with an idea with her sidekick Kronk to kill Kuzco with a poisoned drink. But when Kuzco tries it, it's revealed that it wasn't poison, but it was a Llama potion. She then sends Kronk to stuff Kuzco in a bag and dump him into the river, but the bag accidentally falls into a wagon of a peasant named Pacha. She then gets mad at Kronk for not completing the mission and they later have to spend the whole day in the forest searching for Kuzco and Pacha.

As soon as Kronk is befriended with a squirrel named Bucky, Yzma asks the squirrel where the Llama (Kuzco) went and then go to the place where the Llama left off. They later end up in a bar and figure out a Llama in disguise was actually Kuzco, Pacha then tells the lady in the bar that it is her birthday and they later celebrate Yzma's supposed birthday. Kronk then tells Yzma about the man in the bar he recognized as the peasant who accidentally took Kuzco. Yzma later goes to Pacha's house to find him along with Kronk. They are later distracted by Pacha's children and wife so Pacha and Kuzco could leave. They later chase them, only to get hit by lightning but survive, and they make it to the temple and get the human potion.

Yzma is then betrayed by Kronk when he cuts the chandelier rope, but she survives again and sends Kronk into a pit. She then sends to guards to kill Pacha and Kuzco (Llama) and lies to them about killing emperor Kuzco since they don't recognize the Llamas voice and Pacha then pushes the Animal potion to the guards and then turns into animals. After Yzma's henchmen fall into their deaths, Yzma then tries to stop Kuzco and Pacha for finding the human potion and she later ends up turning into a cat. When Yzma accidentally throws the potion somewhere in the temple's face, she later falls to her death only to be saved by a trampoline again and tried to get the potion for the last time, but she is defeated when Kronk opens the door without noticing Yzma. She then ends up in Kronk's camp along with the other children, including Pacha's children.

Yzma as a cat 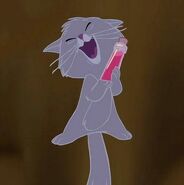 Add a photo to this gallery
Retrieved from "https://descendants.fandom.com/wiki/Yzma?oldid=95416"
Community content is available under CC-BY-SA unless otherwise noted.